It’s not a mirage, Business ByDesign is coming!

This week, several of the Enterprise Irregular bloggers (i.e., Jon Reed, Redmonk’s James Governor, Michael Krigsman and I) were given a briefing on SAP’s Business ByDesign product by Jeff Stiles, Rainer Zinow and Christoph Behrendt of SAP.

Business ByDesign is a SAP application software suite the company announced in 2007. The software is a software-as-a-service (SaaS) product and is remarkable in its overall product breadth.

Since its initial debut the product has had a subdued/constrained rollout. Specifically, SAP wanted the time to refine their SaaS architecture to enable better multi-tenancy capabilities and to create a winning channel environment that would be profitable for both the partners and SAP. To that end, Business ByDesign sales have been limited to six countries for the last year or so.

– Business ByDesign sales will continue to be limited to the same six countries.

– SAP has enhanced the user interface within the product

– SAP has introduced a volume reselling pricing plan for the channel partners. It has also created a revenue sharing plan for the partners, too. Note that SAP has not changed its pricing for the product. It’s still $149/user/month.

– The company expects sales to take off measurably in 2010 but I would suggest that it make take much of 2010 to get the sales volume to climb demonstrably as it takes time to train channel partners, develop a sales pipeline, etc.

– Unlike other SMB (small-to-medium sized business) applications from SAP, this product line is still being run on SAP’s own data centers and hardware. SAP had sold its hosting center to British Telecom earlier in the year but this center did not support the SaaS solution. 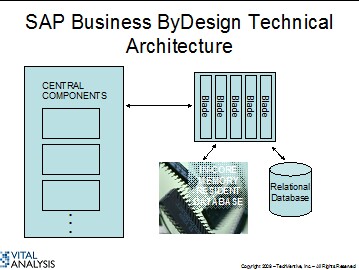