Time to inoculate your firm against early-onset Zombieism… by coming to the Blueprint Sessions 3.0 this December

When  Zombieism takes its grip on enterprise operations, many fail to realize… until it’s too late.  In fact, many of you reading this may already be exhibiting signs of early-0nset Zombieism and immediate inoculation is imperative…

But never fear folks, as the forthcoming BluePrint Sessions 3.0 in New York this December are specifically designed to detect the early warning signs of creeping Zombieism and help you do something about it.

Just picture the scene, the leaders of the leading outsourcing providers and advisors face off with 75 of the leading buyers of outsourcing services.  Pure ITO and BPO with a twist of shared services and GBS.  And there is one common rule which applies – all egos must be left at the lobby of the W Hotel Union Square New York City, or face being personally escorted from the premises by the corporate Zombie-buster himself, Lee Coulter.

In all seriousness, we’ve arrived at the sixth HfS Sourcing Executive Council summit, and this one has all the ingredients to provide the jolt this industry needs to define its purpose, its career paths and its long-term direction.

So, without further ado, let’s take a closer look at the festivities… 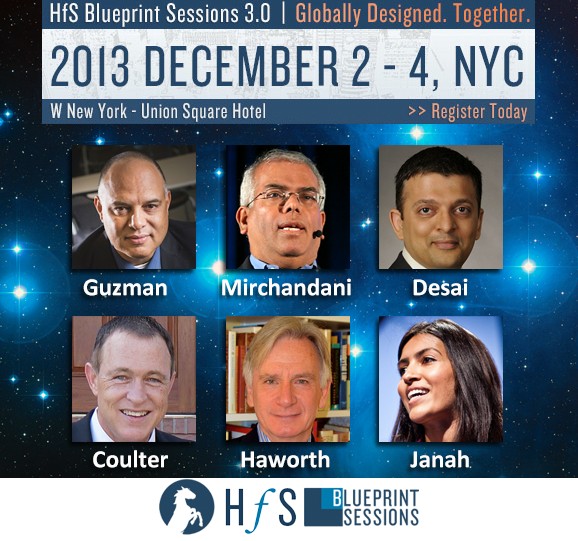 We start on the Monday night with a private buyers-only reception and dinner on the evening of the 2nd where a garlic-free evening promises to lubricate the intimate conversation and set the agenda for the following two days.

Guzman gravitates. We kick off the intellectual proceedings with legendary CIO, David Guzman presenting on the Data-Driven Organization.   David is CIO for pharmaceutical wholesale giant H.D. Smith, possessing a stellar track record in the data-hungry healthcare, pharma and retail industries where he served as CIO for the likes of Acxiom, Owens & Minor and Office Depot.  Any of you who have crossed paths with David will be eagerly anticipating his views on where the future of data and analytics is heading.

Vinnie validates. Then comes the irrepressible Vinnie Mirchandani, one of the all-time great technology bloggers, where he will stoke the morning fires by addressing Five Disruptions Shaking the Foundations of the Modern Enterprise.  If any of you don’t know who Vinnie is (and shame on you if you don’t), he’s a former analyst with Gartner, consulting with PwC, and today a serial entrepreneur and author.  Vinnie’s pupliteering will be palpitated by HfS’ Ned May as he probes deep into the disruptive dynamics.

Tim and Don delectate. We then get treated to a double-act of vendor management debate, with the lively and (occasionally) outspoken Tim Norton, now with UPS after a long career with GE, teaming up with his colleague Don Hickey to tackle the topic of Progressive Vendor Management head-on in his usual no-frills style.

Craig encapsulates. The afternoon feature some serious governance debate, with HfS’ Mike Beals leading off a discussion on training and certification, followed by a new double act to saviour:  the inventive Craig Libby of USAA twinned with HfS Fellow, and industry outsourcing veteran, Paul Cervelloni tackling the little topic of Creating an Actionable Road Map for Attaining a Progressive and Mature Governance Program.

Michael and Jo Ann invigorate. The sticky topics continue to get stickier with Deutsche Bank’s Michael Heeger going for the kitchen sink with The Good, the Bad, and the Ugly followed by The Hartford Group’s Jo Ann Tan who wrenches herself from her road-mapping to discuss  the topic we all having in common, Getting to Where We Want to Be.  If there is anyone who does not want to get where they want to, I suggest they stay away from this one…

Everyone Speed Dates. We then do something I once vowed never to take place at an HfS event… Speed Dating.  Sigh. We’ll also lock the doors, so there is no escape from this one… like a colonoscopy, it’ll be over before you know it and you’ll feel better for the experience.  I think.

And Leila liberates. After the horrific experience of Speed Dating, we promise to make it up to you with a healthy injection of food and booze, where we will be treated to Samasource CEO, Leila Janah talk to us about how Samasource has moved 4,000 workers and their families over the poverty line in under five years, and spun out a domestic program, SamaUSA.

Reality-check. The hangovers are guaranteed to kick in with the latest rendition of the State of the Industry, this time being tag-teamed by yours’ truly and BPO/Robotics/Techie brain-box Charles Sutherland.

The Zombie-busters visit from the future.  If you just can’t come back down to earth after witnessing 17 captains of industry duke it out, then Cigna’s John Haworth and Ascension Health’s Lee Coulter will do their best by reenacting what the world would look like when some characters  from some future point in time visit us to assess how our enterprises are falling into a state of creeping Zombieism – and what catalysts will/should/can occur to break the cycle.

A brief sojourn to Robotistan. Sending us back into the realms of an alternate reality – in fact, into the land of the robots – is Blue Shield of California’s Pradeep Khemani, where he will lead a discussion reminding us that Outsourcing: An Interim Step Towards Automation.

Back down to earth and the ‘innovative partnership’ topic. And after we’ve been truly robotized by Pradip, Coventry Healthcare’s Rajesh Bhutani and Patty Onion will bring tears to our eyes, when we tackle that thorny topic Traveling the Path from a Cost-Saving to an Innovative Partnership.

Our dysfunctional career paths are exposed. However, just as you think you’re going to survive  until cocktails, we unleash the fearsome feistiness of Change-maestro Deb Kops and HfS’ Talent Queen Christa Degnan Manning to put everyone on the spot when we debate our own futures and undefined career paths with Creating a Blueprint for Global Services Talent.

The grand finale. And to cap it all, we finish up with the pièce de résistance as we wheel out the sultan of sourcing himself, Northern Trust’s Jay Desai, to lead the Family Fued-themed buyside team as they look to take on the Sell and Advise Families.  Oh fun.

And then there are the much-needed drinks…

Bottom-line:  If you like the status quo – and creeping corporate Zombieism is a viable option – then this little extravaganza just ain’t for you

The outsourcing business is in danger of killing itself with boredom, with repetition, with believing its own bad marketing.  Most of the corporate world has little clue what “outsourcing” is beyond subbing onshore with offshore labor.  It is a business with unclear career paths, with over promised outcomes, and too many struggling and distrusting relationships.  Can we change all this in two days of great discussion and open views?  Let’s give it a shot 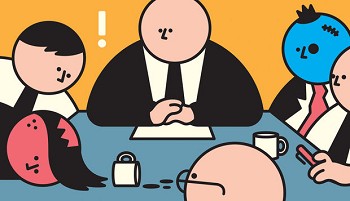 I’d personally like to thank our sponsors for helping with the ever-spiraling cost of putting on an event in New York during Xmas shopping season:  Accenture, WNS, HP, Cognizant, IBM, Infosys, BluePrism, Sutherland, HCL and TCS.

See you in December!

Click here to learn more about the Blueprint Sessions 3.0

One response to “Time to inoculate your firm against early-onset Zombieism… by coming to the Blueprint Sessions 3.0 this December”