A passion for manufacturing

4 years ago, in The New Polymath, I quoted Jeff Immelt, CEO of GE  “I believe that a popular, thirty – year notion that the U.S. can evolve from being a technology and manufacturing leader to a service leader is just wrong.” GE, of course, has been embedding all kinds of technology as it makes its turbines, locomotives, aircraft engines. MRI scanners and other products “smarter” in its vision of the “Industrial Internet”.

But Immelt was prescient even for other US companies. The energy boom thanks to fracking, and shifting global labor and shipping economics are returning plenty of manufacturing back to the US. While Apple continues to manufacture heavily in China, its designers (yes, designers) are pioneering a revolution in massive scaling of precision machining, solid state welding and other next-gen manufacturing for their Unibody and other innovations. Meanwhile in Germany, as my summer book project showed there is excitement about Industrie 4.0 –  humanoid robots, additive printing, augmented reality shop floor training, wearable computing. Japan, faced with an aging workforce continues to pioneer with shop floor and other innovation and produce sophisticated equipment to allow Apple and others to evolve their craft.

Manufacturing  is going through a remarkable Renaissance.

So, I was happy to reschedule and join a Plex sponsored afternoon with several of its customers and its own manufacturing savants (like Jason Blessing, CEO and Jim Shepherd and Louis Columbus. ex AMR Research). Plex, from the heartland of the US manufacturing industry in Michigan, is one of the few cloud ERP vendors with a focus on manufacturing.

Kelli Stokes from Caterpillar deserves the credit for the title of this post. She used the word “passion” often as she described Caterpillar’s own global near engineer-to-order manufacturing and their own version of smart machines for the Internet of Things.

Jeni Britton and Charly Bauer described the configuration, seasonality and traceability challenges as they deliver artisanal, ice-cream flavors with carefully sourced ingredients such as rare vanilla and Snowville milk at growing production volumes.

Bob Greenberg of Active Power and formerly of Dell and AGCO described how telemetry is reshaping manufacturing and the diversity in manufacturing talent around the world.

Ray Wang moderated the conversation which meandered in many directions from integration and security in the cloud to mass customization to algorithmic impacts on plants . An artist from Imagethink nicely captured the range of topics during the session – in photo below.

And as if the session not invigorating enough, we were treated to a variety of Jeni’s finest flavors. A bite of the Salty Caramel ice cream sandwich is guaranteed to generate even more fiery passion for manufacturing! 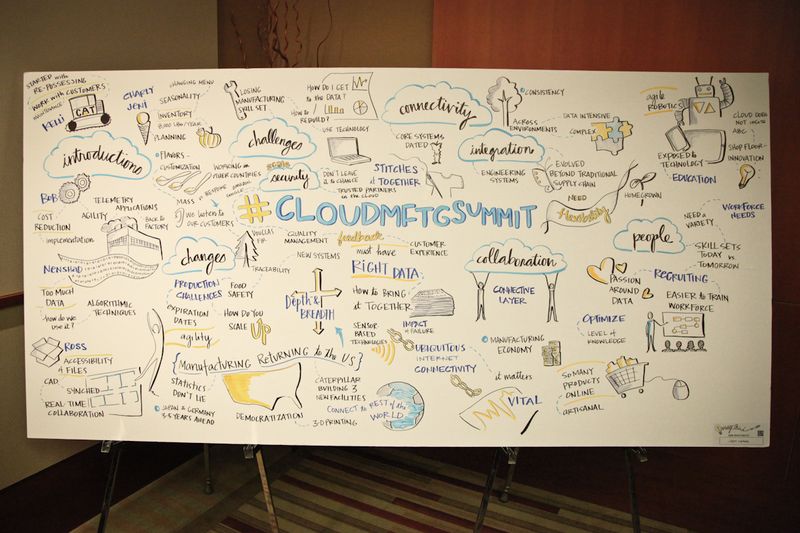