Sales Gets Too Much Credit and Too Much Cash for Selling 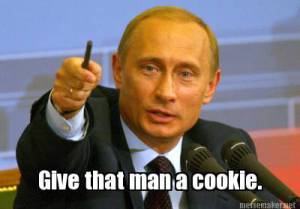 Oh boy, time for even more controversy.  Did he really just say that Sales gets too much credit?  Shouldn’t everybody be thinking that Sales is Job #1 for Everyone the way NetApp’s Tom Mendoza or countless other former Sales VP’s would?

It’s shocking, I know, for me to say what I just did and I don’t mean in any way to demean Sales. But all too often Sales wants to sit at the top of pantheon, call all the shots, take all the credit, get the biggest comp packages, and generally act like everyone should be working for them.

Boards and Investors eat this up because they’re short-term aligned, just like Sales, but we’ve seen countless times in American Business that there are problems with entrusting everything to the short-term mindset.  Just remember one thing–Steve Ballmer was a Salesman first and foremost, but it was on his watch that Microsoft lost their way.  It isn’t that Ballmer was necessarily a bad guy, or even a bad Sales Guy.  He’ll be the first to point to the steady growth in Microsoft profitability over his tenure.  Yet, there’s something desperately missing from these facile proclamations like Medoza’s in the Forbes article:

In the end, companies exist for one reason: to sell their product or service.  If the company can’t sell its product or service, it will fail–and all of the employees and managers will have to go do something else.  Everything that anyone in the company does, at any time, is secondary to the job of selling.

A company that gets too focused purely on selling their product or service runs the risk of losing sight of the partnership between Company and Customer.  They risk taking that Customer for granted and assuming there’s always more where that came from.  But we live in a world of frictionless communication, where we can cross 6 degrees of separation to pull a reference on any product, company, or person with ease.  We live in a world with a long memory, where bad service and bad product anecdotes live on perpetually on the Internet.  We live in a world where recurring revenue is King.  In short, we live in a world where Customers are Empowered and Sales is increasingly weakened.  The balance is inexorably moving to Customers.

It would’ve been more accurate and more enlightening if the Sales department could’ve been named “Closing” instead of “Sales.”  It’s what most of them do, it’s how they think, and it’s typically when they enter the process.  Of course as soon as you go down this line of discussion, the Sales Exec will back up and start talking very smoothly about a focus on Sales and Customers, but that’s a defensive ploy and largely semantics.  Sales is incented for short term performance, but the war is won in the long-term.  Sales are Closers which by definition is a short-term exercise.  Their employers can’t afford to pay them the rates they get to start any earlier in the Sales Funnel.  They wait for buying intent or, to use the jargon for it: they wait for qualified leads.

Ask yourself what’s harder:  convincing people who already want to buy a product like yours to pick yours, or convincing people they need the product in the first place?  Both are critically important, but a surprising amount of the work involved in either challenge has little to do with Sales.  If a company has no budget for your product category and Sales has to go in and create budget, that sends the sales cycle through the roof.  Especially in tough times like these where “creating budget” means a year of meetings and delays.  Sales is simply to expensive a tool to do that work.

Sales relies on Marketing to do its job right to get the word out so people create budget and then actually contact the company and become sales leads. Without leads, Sales accomplishes little selling. Sales relies on Product to build Products that are worth buying. Without something to sell, there can be little selling. Without decent word-of-mouth and references from Delighted Customers, it is a long uphill battle to sell and competitors eat your lunch.  Without great references and a great brand, what do you have left to compete with except price?  That’s a tough place to be in and still pay for expensive sales people.

Perhaps most of all, real scratch-golfing, Rolex timekeeping, Bally-loafer-shod, and Armani-suit-clad Salespeople rely on Market In-Efficiency for their success.  They need to be Information Gatekeepers.  They have to force you to go through them to learn anything.  They’re the guys who will insist prices not be published so they can negotiate.  They don’t like Content Marketing, they want the lead forms filled out in triplicate before they give a prospect the time of day.  The White Papers you’ll typically get are long on hype and short on substance.  Their sole purpose is to get you into a meeting with the Salesperson.  They’re the promise-them-anything-to-get-the-sale then move on to the next one gang.  I don’t mean to say it like it’s a Bad Thing, but it does promote a certain myopic perspective that is not especially well-aligned with a focus on Delighting Customers.  Ask any CIO who is in the business of buying expensive Enterprise Software what they think and they’ll point to scar tissue and tell you quickly that more transparency is always a good thing.

That’s why I tend to bristle anytime someone argues purely that Sales is Job #1.  At best I’ll settle for having Job #1 be Delighting Customers.

In the end, everyone has a role to play–the Closers, the Marketers, the Makers, the Customer Service people (or Customer Success is an even better way to think of it), and the Bean Counters (if nobody took record of the sale or billed the customer, there was no sale, just the cost of product going out the door).  It’s a Team Effort, and it’s very important to keep some perspective on that, particularly the Customer’s perspective if you expect to succeed in the long run.