About three weeks ago, I wrote a post on my journey to health (losing weight) via a trip to the Duke Diet and Fitness Center (DFC) and also identified some broad lessons that can be generally applied when it comes to optimizing both marketing and customer experience.

For many reasons, including my recent attendance at salesforce.com’s Dreamforce 2013 and their thematic “Internet of Customers”, recently, I’ve been thinking about the oft-buzzworded “Internet of Things” and how it’s being used to portend the beginning of a totally connected mankind. The tendency that most of the articles and posts have is to put it sometime into the future but in reality its first phase is well underway.

As I continue down a path to I hope what ends in excellent health, I realized how much I’m dependent on interconnectedness to actually accomplish my goals. I rely on so many different devices and apps that I actually don’t know how I’d accomplish what I’m trying to do without it.

Look at this day in the life when it’s focused on my health….

The Internet of Pings

I go nowhere without my Fitbit One which is responsible for measuring how many steps in a day I take and how many calories I burn according to the standards I set are. I need to average about 11,000 steps a day in order to optimize my chances of losing weight and I probably am very close to that – actually a little over if I look at the stats. I actually CAN look at the stats, which continues to make the interconnectedness point. That Fitbit One via Bluetooth is synced with its own app and to Microsoft’s HealthVault, which has all my important medical information including that provided by Fitbit One.

HealthVault has become my central repository for everything and its available as an app in IOS or Windows or Android. It also can be accessed via the web. It is one hundred percent cloud based. Because I’m pre-diabetic, I’ve decided to monitor my blood sugar and bought a OneTouch VerioIQ Blood Sugar test device which isn’t connected to anything but is a relatively accurate over the counter device that gives me data that can be then placed in HealthVault – though at this point, manually. Which is why “pings” and not “things” at this stage.

But Fitbit One is also synced to my favorite of these apps, MyFitnessPal.com which I use on my iPhone, iPad and online via browser. The Fitbit One syncs the calories I’ve burnt with the thresholds I’ve set in MyFitnessPal so I can see how many calories in a day I can safely eat and continue to lose weight. What makes MyFitnessPal so important is that it syncs with the Fitbit One within seconds, and it has a user generated database over 1 million foods that can be accessed and entered into a running diary of the food I eat and the nutrition breakdown for each food by meals every day. It also tracks goals and allows you to set the levels of caloric intake you aspire to. It can do much more than that too. It’s worth looking at the site just to see the vast scope of this extraordinary application.

But the interconnectedness goes a lot further. When I do my cardio, I am wearing a Polar FT60 Heart Monitor, which is giving me an accurate account of my caloric burn and my fitness in general. While it’s measuring that based on my heart rate, the Fitbit One is monitoring the steps I’m taking. In order for the Polar FT60 to work, as in all heart monitors, I’m wearing a sensor belt and a transmitter – in this case the Polar H7 Bluetooth transmitter. That Polar H7 transmitter also syncs with something called MySleepRate.com, which is IOS app that literally figures out my sleep patterns – how much time I am awake, how much time I am lightly sleeping, REM sleeping, deep sleeping; how much time I’m stressed, aroused (meaning frequency of awakening by something, no…not THAT arousal! Jeez.) It even records the environmental noises and if I snore and the time of night that it occurs to see if those noises or snores woke me up. It gives me a sleep quality rating and after 5 days will give me a sleep assessment and how I can do better – something I need because I average considerably less than 5 hours of sleep a night.

So what do we have? It looks something like this (pardon my graphic horribleness). 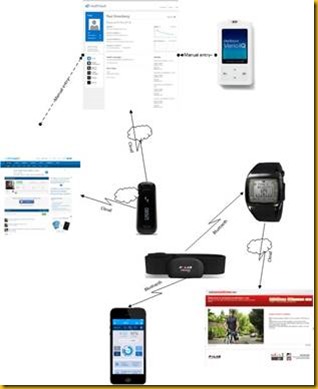 If you look at this, you get some “hipbone connected to the thighbone” action – quite a bit in fact, though by no means is it truly fully interconnected – yet. While some of it is synced (FItbit One with varying) and some linearly tied (Polar H7 dual usage) there is still disconnection. But there is enough there to see what the early stages of the Internet of Things looks like in every day life. That’s why the Internet of Pings. There are devices communicating with each other; data is being provided; but the deeper fuller interconnectedness is still a promise or two or three away from realization. But the future is going to be fascinating. That’s one of the reasons I’m working so hard on my health. I want to be around to see it. The Internet of Pings/Things might be just the way to get there.

Also, please forgive me if the links look link running product endorsement. I’m not a brand influencer type of guy – I usually find it offensive. I’m not endorsing these, but they are very likely, via the Internet of Pings, extending my life, if not outright saving it.