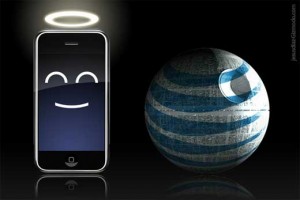 The Fake Steve Jobs unloads in a hilarious post on AT&T for trying to create “incentives that would encourage people to stop using AT&T’s data network so much.”

and Randall ends with

“AT&T, send some engineers to redesign the iPhone to make better use of the country’s fastest wireless network.”

Wow, this is what Denny Strigl of Verizon would call ‘unfairly maligned”