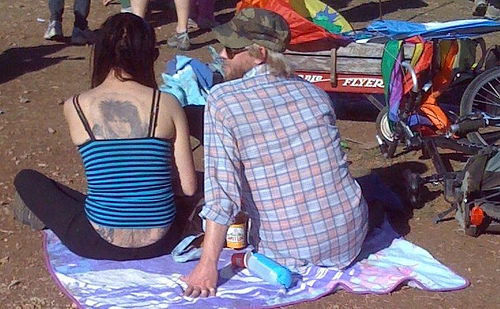 While we “don’t do numbers” here at RedMonk, I come across many interesting numbers each week. Below are some. And don’t forget: we’re also chock full of interesting green-related numbers over at Greenmonk!

Nearly 40 percent of adults ages 18 to 40 now have a tattoo or non-earlobe piercing, according to the Pew Research Center’s Gen Next Survey. And those visible displays of personal style sometimes clash with company-appearance policies and perceptions of what older bosses expect of younger workers.

Last week I was at STGEvent09, which I liked just fine. As with all these analyst conferences, there were many numbers flying around. Here are two fun ones:

[P]hone surveys of more than 1,400 CIOs from companies across the United States who employ at least 100 employees [asked their policies on social media usage at work, saying]:

Is that the Internet in your pocket, or are you just happy to see me?

Do you browse the Web on your phone, iPod touch or other portable wireless device? Congratulations, you’re one of the 450 million mobile Internet users, according to IDC. The analyst firm today predicted that number would reach 1 billion by 2013.

I’ll do some quick math. Apple has shipped more than 30 million iPhones, so there’s a possible 6 percent or so of mobile Internet users — and that’s not counting more than 20 million iPod touch users. Another nearly 30 million Crackberry — ah, BlackBerry — addicts accounts for another 6 percent of users.

The average American sucks down 34 gigabytes of data per day, half of that from video games, says the latest update of a study by two researchers at the University of California in San Diego. That’s enough to fill 7 DVD discs. Every day.

After video games (55%), the next highest data volume is TV (35%) and movies (10%). Computer data makes up one quarter of one percent, because most of it is text, which hardly takes up any data at all.

Antonio Maria Costa, head of the UN Office on Drugs and Crime, said he has seen evidence that the proceeds of organised crime were “the only liquid investment capital” available to some banks on the brink of collapse last year. He said that a majority of the $352bn (£216bn) of drugs profits was absorbed into the economic system as a result….Gangs are now believed to make most of their profits from the drugs trade and are estimated to be worth £352bn, the UN says. They have traditionally kept proceeds in cash or moved it offshore to hide it from the authorities. It is understood that evidence that drug money has flowed into banks came from officials in Britain, Switzerland, Italy and the US.

China not yet taking over Africa

Comparisons with other countries and groups, Ms. Raine emphasizes, are vital in such studies. While 16% of Africa’s oil exports went to China, 55% went to the U.S. and EU combined. Africa pumped 267,000 barrels of oil per day for China, but Exxon Mobil alone pumped 780,000 barrels per day for the U.S. Although China’s bilateral trade with Africa came to over $100 billion in 2008, in 2007 its bilateral trade with South Korea amounted to $160 billion.

In Afghanistan, airstrikes have been strictly limited, to minimize casualties. In Pakistan — if news accounts about those assaults are even remotely accurate — the attacks are far, far more deadly. According to an analysis of public reports by the New America Foundation, 82 U.S. drone attacks in Pakistan since 2006 “have killed between 750 and 1,000 people.” Up to 320 of those may have been civilians. The Long War Journal, examining the same records, calculates that 447 people have been killed in 42 reported drone strikes during the first nine months of 2009. The website estimates that only 10 percent of those deaths have been innocents.