Last week, Microsoft confirmed the rumors that it was buying Opalis, buying what looks like a solid process automation platform to give it’s System Center line a much needed boost in the good old fashioned IT Management space.

Opalis takes processes in IT that would otherwise have to be done manually and automates them. It uses a combination of workflow creation, run book cataloging, and what’s hopefully endless amounts of integration code to work with the various infrastructure out there to deploy changes, remediate problems, and otherwise do the tasks an admin would have to do by hand. You can imagine that in a virtualized and cloud-driven world, this kind of automation is table steaks. Here’s how I summed it up in 2007 after talking with Opalis:

The GUI is a console that lets you define workflows for IT management: check the state of a system, if it’s bad, open a help desk ticket, notify this system, then do some other action. The idea is to create a “run book,” or a set of modeled courses of action to take when some even occurs: be it reactive like responding problems in IT, or less “fire fighting” like provisioning a new server in response to a change request.

What I liked about what I saw was that it seemed to be an integration layer — a “spanning layer,” even — on-top of all sorts of existing IT management software.

Now, I’m always a bit suspicious of the wide applicability of anything that involves drag-and-drop modeling. The simple tasks you see in demos can’t speak for the long-term functionality of such a product. But, the idea and the implementation I saw looked nice. The modeling of workflows and execution of thereof certainly fits in well with enterprise ideas of systems management.

I haven’t really heard much negative about Opalis over the years, and their integration with Big 4 and beyond enterprise IT management seems legit. 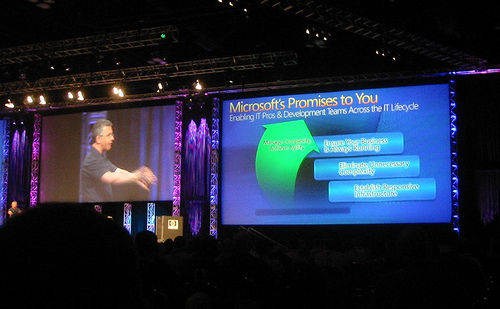 I’ve always had a soft spot for Microsoft’s IT Management efforts because their Dynamic Systems Initiative (DSI) was so damn dorky and developer oriented. DSI is a classic embrace, extend, & rename architecture from Microsoft, but in seeing them go through their 10 year plan over the past 4 years, it’s been delightfully transparent in intentions and vision, vs. Big 4 folks and the Tower of ITIL.

The problem for Microsoft has been delivering on those ppt-cum-pptx’s, esp. with it’s perpetually “next year” service desk offering and things like bouncing SDM, SML, Oslo, etc. around as the final answer to The IT Modeling and dev/ops synergy candy-land. The System Center group has made previously unthinkable journeys into heterogeneity and interop all throughout STB (the Server and Tools Business, where IT Management resides in Microsoft) and in System Center…and not just (but mostly) through its usual approach, relying on mercenaries partners to get their hands dirty.

Indeed, the beyond-Microsoft integration that Opalis brings will be helpful for Microsoft. Microsoft said they wanted to be one of the Big 4 (IBM, HP, CA, BMC) just a couple years ago. Right before all this cloud-mania, the System Center folks seemed to have gone through a humbling but healthy experience: while they would be the best way to manage Windows, they were damn sure going to be excellent at managing the rest of the world too. As Bob Muglia joking put it during a the MMS 2008 keynote: “I guess I can’t say that I recommend you running this many non-Windows system in your environment. But, if you do, we want to be able to provide you with a great cohesive management environment for that.”

To be fair, Microsoft has been distracted by cloud and virtualization where they’ve been keeping up a pace one can expect from an elder company, though not on the same speed-doses as IBM, who seems to have stuck its cloud folks on the juice diet. Cloud talk has finally gotten to the point where we realize there’s still a need for good old fashioned IT Management, just souped up with virtualization and cloud technologies. Realistically, Opalis + System Center means a good step towards Microsoft Big 4 aspirations.

The Cloud Angle – Too Much Duct-tape?

The stretch goal is jamming the now quant concept of “runbook automation” into the heady world of cloud computing. Microsoft’s cloud offering, Azure is a sister line of business to System Center (both are in STB), which should mean all sorts of excitement when it comes to enterprise cloud strategies between the two. And, as the guy who panned “private cloud” last week, I gotta love this commentary on private clouds from the Azure crew:

“Every customer says ‘where can we get a private cloud?’” Alkhatib said. “We’re building them. Within a short period of time private clouds will be available with the same technology we’ve used to build Windows Azure.” [this is the equivalent of me saying “sure, sure,” when I want to move the conversation on to more interesting topics ;>]

However, Alkhatib said he thinks private clouds lack most of the benefits of public clouds, and focused most of his talk on the Azure services that will be offered publicly over the Web.

There’s plenty of blog and news action on the topic already:

Disclosure: Microsoft is a client, as is IBM. We have many IT Management and related clients as well.