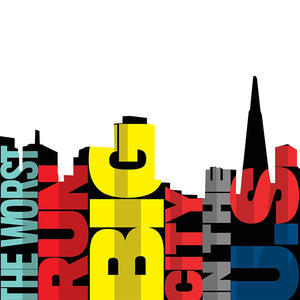 It’s time to face facts: San Francisco is spectacularly mismanaged and arguably the worst-run big city in America. This year’s city budget is an astonishing $6.6 billion — more than twice the budget for the entire state of Idaho — for roughly 800,000 residents. Yet despite that stratospheric amount, San Francisco can’t point to progress on many of the social issues it spends liberally to tackle — and no one is made to answer when the city comes up short.

I don’t live in San Francisco, instead preferring to reside down on the Peninsula but how badly SF is managed still manages to massively irritate me. Why you ask? Easy, because the waste, fraud, and abuse in that relatively small corner of the Bay Area sucks resources out of other communities, whether it be Federal grant money that disproportionately ends up in San Francisco, high surcharges applied to travelers at SFO, our aging water system that requires long overdue overhaul and is owned by the City San Francisco, or the simple fatigue that develops when I have to go into SF for meetings or events and am forced to pay exorbitant parking fees and struggle with an inept public transportation system.

Bottom line: SF is the poster child for broken government, it spends richly yet makes little positive impact on anything and we all pay as a result, if for no other reason than bolstering the average persons view that government can’t do anything right. It’s a national embarrassment and few seem to give a damn.