Effektif: Simple BPM In The Cloud

Ten months ago, Tom Baeyens (creator of jBPM and Activiti) briefed me on a new project that he was working on: Effektif, a cloud-based BPM service that seeks to bridge the gap between simple collaborative task lists and complex IT-driven BPMS. In October, he gave me a demo on the private beta version, with some discussion of what was coming up, and last week he demonstrated the public version that was launched today. With Caberet-inspired graphics on the landing page and a name spelling that could only have been dreamed up by a Belgian influenced by Germans

the site has a minimalistic classiness but packs a lot of functionality in this first version.

We talked about his design inspirations: IFTTT and zapier, which handle data mappings transparently and perform the simplest form of integration workflow; Box and Dropbox, which provide easy content sharing; Trello and Asana, which enable micro-collaboration around individual tasks; and Wufoo, which allows anyone to build online forms. As IFTT has demonstrated, smaller-grained services and APIs are available from a number of cloud services to more easily enable integration. If you bring together ideas about workflow, ad hoc tasks, collaboration, content, forms and integration, you have the core of a BPMS; if you’re inspired by innovative startups that specialize in each of those, you have the foundation for a new generation of cloud BPM. All of this with a relatively small seed investment by Signavio and a very lean development team.

One design goal of Effektif is based on a 5-minute promise: users should be able to have a successful experience within 5 minutes. This is achievable, considering that the simplest thing that you can do in Effektif is create a shared task list, which is no more complex than typing in the steps and (optionally) adding participants to the list or individual tasks. However, rather than competing with popular shared task list services such as Trello and Asana, Effektif allows you to take that task list and grow it into something much more powerful: a reusable process template with BPMN flow control, multiple start event types, and automated script tasks that allow integration with common cloud services. Non-technical users that want to just create and reuse task lists never need to go beyond that paradigm or see a single BPMN diagram, since the functionality is revealed as you move from tasks to processes, but technical people can create more complex flows and add automated tasks.

Within the Effektif interface, there are two main tabs: Tasks and Processes. Tasks is for one-off collaborative task lists, whereas Processes allows you to create a process, which may be a reusable task list or a full BPMN model. 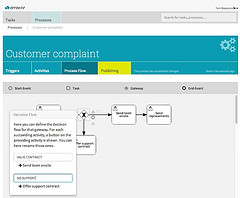 Within Processes, the basic process creation looks very much like creating a task list in Tasks, except that you’re creating a reusable process template rather than a one-off task list. In its simplest form, a process is defined as a set of tasks, and a process instance is executed in the same way as a task with the process activities as subtasks. When defining a new process:

To create a simple reusable task list template, you just give it a name, enter the activities as a list, and publish. If you want to enhance it later with triggers, forms and script tasks, you can come back and edit it later, and republish.

When running a process instance:

As I played around with Effektif, the similarities and differences between tasks, processes (templates) and process instances started to become more clear, but that’s definitely not part of the 5-minute promise.

I’m not sure of the roadmap for tenanting within the cloud environment and sharing of information; currently they are using a NoSQL database with shards by tenant to avoid bottlenecks, but it’s not clear how a “tenant” is defined or the scope of shared process templates and instances.

Other things on the roadmap:

Effektif is not targeting any particular industry verticals, but are positioned as a company-wide BPM platform for small companies, or as a departmental/team solution for support processes within larger companies. A good example of this is software development: both the Effektif and Signavio teams are using it for managing some aspects of their software development, release and support processes.

There will be three product editions, available directly on the website or (for the Enterprise version) through the Signavio sales force:

I don’t know the final pricing, since the full functionality isn’t there yet: Box, Google Drive and Salesforce integration will be released in the next month or two (currently, you still need to copy and paste the URL of a document or reference into Effektiv, and those systems can’t yet automatically trigger a workflow), and the enterprise integration and analytics will be coming later this year.

Go ahead and sign up: it only takes a minute and doesn’t require any information except your name and email address. If you want to hear more about Effektif, they are holding webinars on February 3rd (English) and 6th (German).