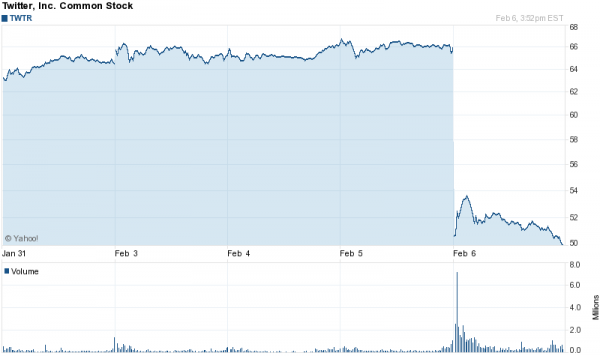 They did put up some good numbers, indicating real progress on their revenue management, which is just another way of saying they are now a successful ad platform. Great, but that’s only as good as your ability to drive audience growth and engagement, and here Twitter is having a real challenge.

When I click on random profiles in Twitter I can see the problem in realtime, there is a significant clustering of people how follow low single digits and are followed by a fraction of that number. The utility of Twitter increases by multiples as personal network thresholds are crossed, but if that increase is driven by a blunt force trauma approach of following everyone you find then the quality goes inverse to the network size.

Next is the format of Twitter’s message has been both blessing and curse, and the timeline has proven to be pretty resistant to alternate presentation formats (conversation view, sorting, etc.). The former has been a problem for Twitter from day 1 while the latter is kind of surprising.

Facebook, by contrast, offers a lot of depth in the personal profile that imbues it with a sense of destination. you go to people’s profile pages in Facebook because there are photos, apps, timeline, videos and more. not so in Twitter.

The third problem is a tough one, most people don’t have interesting things to share in a broadcast format. even broadcasters don’t have interesting things to say over Twitter. Trending topics is a great way to discover breaking news content but it is invariably limited by the network wide approach they use, I can’t say “give me trending for my zipcode, my commute, my school, my travel schedule.”. This is where Google is really on to something with Google Now, it is exclusively relevant to me.

Problem #3, create interesting moments for *me* through the network.

I like Twitter but admit that I use it primarily to share content through, I don’t provide much in the way of editorial content because Twitter doesn’t allow me to do that the way that Facebook and LinkedIn do, and both of those networks appeal to professional and personal networks uniquely while Twitter is somewhat stuck in the middle. Dick Costolo says they have to make it possible for people to “get it” in the first minute. that’s pretty hard to do in a service that has as an intrinsic requirement connecting with other people as a critical path to getting the feedback loop established. Tough problem, I wouldn’t want to have to solve it in the spotlight of being a public company. in a way Twitter is experiencing today what Facebook had to go through on the day of their IPO.

One response to “Twitter’s Problems”