It’s that time of year again, when we look back at the year that was while making next year’s technology and business predictions. 2009 was an exciting year across the board for all things Web 2.0 in the enterprise and related topics. I often find that it’s when we take time to look back at the big picture that we get the best sense for what’s actually happening in the marketplace today.

So I’ll be examining at Enterprise 2.0, cloud computing, and next-generation SOA in this vein over the next couple of weeks, with the year-in-reviews first and then predictions, so please stay tuned.

We’ll start first with Enterprise 2.0, which had a banner year by just about any account. I’ve been working in this space now since it first began back in 2006 (read my first post on Enterprise 2.0), and it’s amazing to see how far it has come along since the early days.

One of the most obvious trends this year is that social tools themselves are now commonplace in business settings. Most audiences I speak to this day — whether or not they are an Enterprise 2.0 audience — the majority of them indicate that they have ready access to some form of social computing at work. This began to uptick significantly last year but in 2009 all data pointed to a significant inflection point. 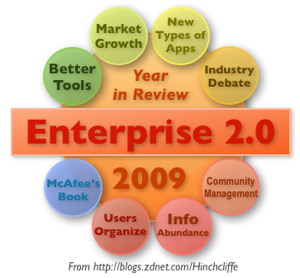 Here’s my take on the more significant trends and events in social computing for business this year:

Next up will be my top posts of the year and then my cloud computing year-in-review.