Read an interesting account of John Donahoe’s turnaround at eBay in Business Insider.  It’s a fascinating discussion that revolves around relatively few premises for how the turnaround was accomplished.  Here are the money quotes:

He de-emphasized eBay’s auction business and started describing the company as a “technology partner” to retailers small and large. eBay added clients Home Depot, Macy’s, Toys ‘‘R’’ Us and Target, helping them cope with a world dominated by Amazon.

So, making eBay a first class technology partner to large bricks and mortar retailers.  Great idea, more on that in a moment, but first, a couple more quotes from the article:

For example, eBay never bothered to develop sophisticated search technology. This made it dependent on Google ads, which took a bite out of profits. And it made it hard for users to find products they wanted to buy, dragging down sales.

Likewise, eBay under Whitman never developed a product recommendation algorithm to match Amazon’s — despite the fact that Amazon credits 30% of its sales to the tool.

Better search, and the ability to do merchandising and product recommendation like Amazon’s.  What if I told you eBay was offered a finished technology solution to each of these problems way back in 2001 and they completely blew it off as uninteresting for their business?

Trust me, I know, because my startup, which was called PriceRadar.com, was the group offering the technology.  We met numerous times with Jeff Jordan at eBay, and even had offices across the parking lot from eBay headquarters right there in Campbell.  We had built a sophisticated textual data mining technology, and had decided this technology could be hooked up to eBay’s data to produce a unique selling proposition.  We would visit with our customers, who were major bricks and mortars retailers like Sharper Image and West Marine, to name two companies that had worked with us.  Walking into a meeting we came to show them something special, something unexpected.  After sending our web crawler to visit their online catalogs, we could generate a report telling them exactly which of their products they could sell on eBay for just as much as they were selling in their catalogs, how many they could sell without depressing prices, exactly how to optimize their listings including which keywords, what time of day to list and close the auction, which eBay “extras” were worth paying for, and so on and so forth.  The software would even let them allocate quantities of product which we would then list on eBay for them to drop ship when the auctions closed.

The bricks and mortars retailers loved it–it was easy to sign them up.  For them, it was an extremely cheap way to add new customers to their house list.  You know, that list that causes them to dump endless catalogs at your doorstep if you order anything from them?  Our fees combined with eBay’s fees were a pittance compared to their existing marketing costs to add a new name to the house list.  So that’s quote #1, making eBay a first class technology partner to bricks and mortar retaillers.

That’s not all we could do.  The site was called “PriceRadar.com” because it had an extremely powerful search engine that was adept at finding listings that were hopelessly lost if you tried to find them with eBay.  We also tracked affinity patterns–if you bought “X” you were also likely to buy “Y” and “Z”.  Plus, we generated endless analytics that the eBay people had no way to track on their own.  They were always surprised and interested when we visited with this information.  It included things like a fine grained breakdown category by category (and I’m talking our categories, not theirs, a taxonomy of thousands of micro-categories) accounting of exactly where their business was coming from.  So much for quote #2 as well–better search and product recommendation.

So what happened?  Why did eBay pass on this opportunity way back in 2001?

Call it an idea ahead of its time.  We offered them the technology in 2001, but it wouldn’t be until 2005 that they’d start to massively lose market value.  By 2008, Meg Whitman was ready to move on and leave Donahoe as her successor.  All tragically avoidable if the article was right about the cure.  But, that’s just it–you would’ve had to see very far ahead to realize it.  4 more years is forever in High Tech.  It was probably starting to get scary even 2 years after our offer, but still, that’s a long time in the Dog Years these companies live in, and they would’ve handily rationalized early problems as being a temporary effect of the 2001 Dot Com crash that would go away.  Then there was the issue of eBay’s culture at the time.  Business Insider describes it well:

Partly, the issue was obvious: eBay had gotten fat and happy. For 10 years it had been a huge success, riding a wave of Internet adoption. During the mid-2000s, eBay was notorious for meetings that always ended in applause — even when the news was bad.

But eBay also had a problem attracting and retaining innovative, entrepreneurial people into its executive ranks.

The fat and happy part and the lack of innovation were terribly obvious every time we met with them or interfaced with their humongous software back end.  They just didn’t quite seem to understand what we were telling them about better search and what I pitched at the time as “Merchandising like Amazon’s.”  Things were so good it just didn’t seem like it was worth the effort to make things better.  They’d narrowly survived making their technology scale–we used to see the news trucks parked every day at eBay so they could run a story about how the site had gone down.  When you’re getting Boundless Growth and Unbridled Demand just for showing up at work, why rock the boat with any new ideas?

Then there’s that ole bugaboo called, “Innovator’s Dilemma.”  You have to be prepared to cannibalize your own business lest somebody else (like Amazon) decides to do it for you.  The most substantive objection eBay had about our technology was that they were afraid it would alienate the mom and pop businesses that were responsible for the Lion’s Share of eBay’s listings.  The message was something along these lines:

We’re afraid that if you make it super easy for Sharper Image to suddenly have a big eBay presence the mom and pops will take that as eBay competing against them and they won’t like it, they’ll pull out.

I tried hard to explain that they had no place else to go–they were hopelessly dependent on eBay.  There were no other easy partners who could create an e-commerce presence for what had been small bricks and mortar independent retailers.  At PriceRadar, we had interviewed dozens of the most successful resellers on eBay in various categories and learned that many of them had closed their bricks and mortar storefronts because eBay was so lucrative they’d rather sell online out of their home offices than pay the overhead of owning an actual physical shop.  Many of them had unique merchandise that the big retailers didn’t have anyway.  The eBayers would listen politely, smile, and then move on.

If you’re curious, here’s what the old PriceRadar site looked like in 2000: 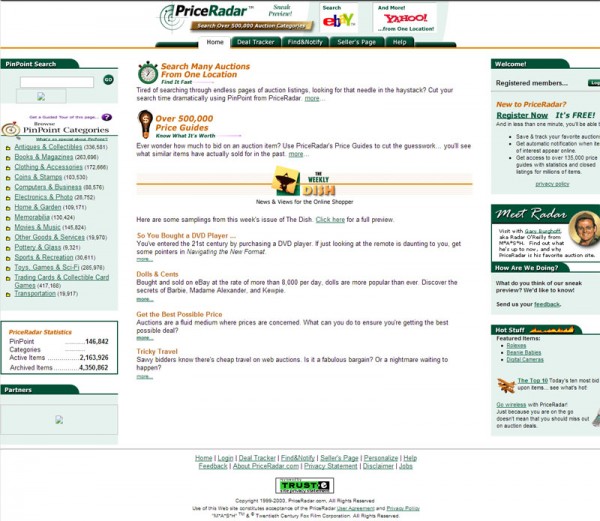 We had even signed Gary Burghoff as a spokesman!

That was the Consumer Search front end circa early 2000.  There was another client used by the Retailers to list their products on eBay via our service.  We did a number of unique things at PriceRadar, many were things people said couldn’t be done.  Like downloading all of eBay’s auction data and processing it on SQL Server–the Unix guys all said we’d have to have Unix and Oracle to make it scale, but we didn’t.  We made it through the scaling hurdles that had plagued eBay in a relatively short time, handling their data volumes in our architecture.  Today, it would’ve been called a “Big Data” application, but back then nobody had heard that term.  The search algorithms were very sophisticated and involved a mix of computer algorithms and live human “taxonomy experts” that fine tuned the results by creating special search rules on the micro-categories.  In the end, it was a bust.  When we started, there were lots of auction houses out there, and it seemed like a super sophisticated search engine monetized by retailers who wanted to list was a great plan.  Unfortunately for us, network effects meant that eBay controlled that entire space in a relatively short time.  Once they were the only game in town, they were also the only buyer in town.

Too bad for all concerned eBay didn’t realize we had the solution for a lot of problems that would nearly kill the company.  PriceRadar was a great lesson in market timing and exit strategies in the face of network effects and derivative businesses.  It’s also the failure I regret most as the product and technology were dynamite.