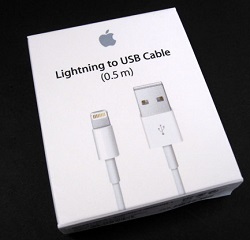 There are so many amazingly positive visuals of Apple. Customers leaping for joy after they have lined for hours outside a store for their new device.  My kids when we traded their Blackberries for iPhones. My kids and wife when they traded their Windows laptops for MacBooks (I am sole Windows holdout in the household). My wife as she walks around the house with YouTube on her iPad. Her store experience as she goes for training there. My eyes as my magazine and book reading has migrated to the iPad mini.  Do I sound like a fanboi?

b) The Lighting to USB cable – one that BusinessWeek asked about “Is this Apple’s worst product?”

When we bought our iPhones each came with a cable in the box. I bought 6 extra – for our cars and our travel. Well, given our young and mobile family and our friends the cables started to disappear at a rapid clip. At $ 20 a pop, like most parents I looked for options. Found some at Amazon for under $ 5 for the cube adapter and the cable.

Then word started spreading the knockoffs were an electric risk and I saw Apple’s offer to trade them in for $ 10 each. I took 4 adapters and cables to their store. For each I was emailed a Genius Bar reservation. I thought that odd but the appointments were sequential so did not pay much attention.

The store rep asked me where the associated devices were. I said with the family members who are at college. He said I needed to bring them in so he could get the serial numbers. I said surely Sprint registered them and they are in your CRM system. His response – not easily available to us in the store. After a while in the back room, he said he found 3 in the system so could only trade 3. His supervisor later intervened and offered to take all 4.

He also said the offer only applied to the adapter not to the cable. I asked if Apple knew only the adapters were causing the problems. He did not know but could not trade the cables.

I sent a letter to Apple HQ asking why the cables were not included in the offer. In their customer service process store questions are referred back to the store. The store manager called and left me a message “I remember you from your visit. I think  we took care of your problem”. No further follow up. Another CRM failure.

A few weeks later my daughter’s iPhone power button had problems. The store initially told me her AppleCare did not cover that. Then they told her they did not show AppleCare associated with her phone – more CRM system issues. When I dug up the paperwork, they gave her a new phone.

Bang – she must have synched her new phone with one of the knockoff cables we still have and it shorted her MacBook. Back to the store and they said they were having many such issues. Four months ago I was told  the problem was with the adapters not the cables.

With iOS7 Apple has added warnings if you try to use a knockoff cable. That’s certainly progress but it does not fix their CRM issues or the likelihood that at $ 20, many parents will continue to be exasperated and a new wave of knockoffs will surely keep showing up in the market while many old ones are still out in the wild.