Rethinking Work In the Collaborative Era

Over the last few years, there has been an enormous amount of industry discussion about how the digital world is changing the way we work. To any reasonable observer, the ways that we communicate, interact, and collaborate with each other are all in the midst of profound change. At least the why seems fairly clear.

At at high level, there appear to be three major root causes for why collaboration — the very core of how people come together and function as a business — is in the midst of reinvention:

Harold Jarche calls the reaction of our existing businesses to this new operating environment the “industrial disease” for which complexity is the single biggest challenge to working effectively:

Organizations need to understand complexity instead of adding more complication.

The long and short of it, despite many attempts, is that we still don’t have generally accepted management theories about how to cope with these changes. That’s not today there haven’t been many attempts to describe aspects of it. Over the years these have included Enterprise 2.0, social business, wirearchy, podularity, holacracy, to name just a few of the more well-known ones.

But as we are still in early days — although we’re perhaps past the end of the beginning — of the story of how digital networks are remaking work, and it is still very much unfolding. Frankly, we’re just trying to learn enough about what’s really happening to our organizations to articulate it well. Certainly, the reasons why we must try to understand how work is changing are many, not the least because it’s what we must do to create value for ourselves and society. But we’re finding even how value itself is created and evaluated is in the midst of change. 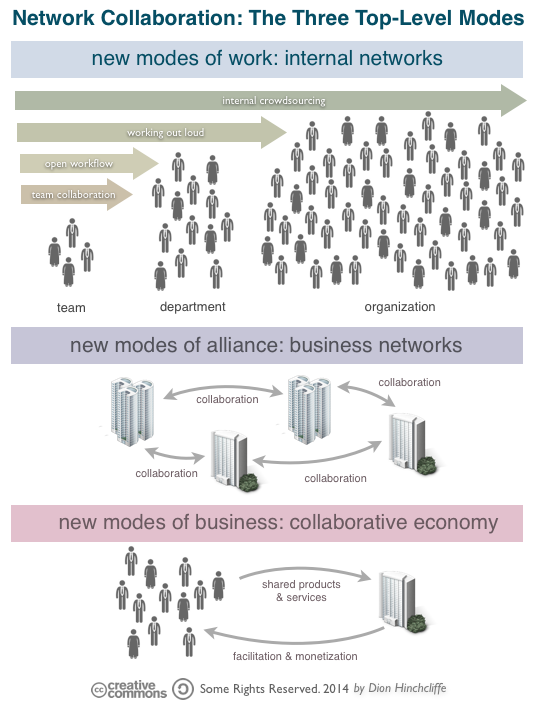 Currently, I believe we’re about to enter another major phase of conception in how we think about work in general, even though we’re not yet done absorbing the last few generations of ideas. This new phase will be more comprehensive, transformative, and almost immediately challenging (yes, even that overused word, disruptive) to our businesses and institutions.

Furthermore, I now think we can get a glimpse of this new conception. Over this weekend I came across Eli Ingraham’s terrific exploration on CMSWire of how collaboration is currently changing. I believe she’s come as close as anyone has been able to get in framing up this new way of thinking about the transformation of work in our times.

Eli says that today’s overall changes to work can be organized and described as top-level concepts:

I see three major forces in The Collaborative Intervention: the Future of Work, the Collaborative Economy and Global Solutions Networks. Their tenets transcend geography, generation, gender and any other constructs that divide us. They are about how we co-exist, and co-innovate, on the planet as human beings.

I’ve rearranged it a bit in my framing of these three major and interlocking new dimensions of work in the visual above but I think this is the right articulation.

First, we are seeing the emergence and primacy of network collaboration. Today’s technologies are remaking team, departmental, and organization-wide collaboration, primarily via social tools, online communities, and other new systems of engagement such as rich collaborative experiences.

Second, at the next structural level, we see that businesses are beginning to use industry-wide and/or domain-specific business networks (communities) to come together to solve problems they are not able to solve by themselves. Don Tapscott’s global solutions networks is probably the clearest articulation to date, but the ideas have been evolving for a while.

And finally, third, we have the collaborative economy, best identified and described so far by Jeremiah Owyang, which is how a large section of the global economy is rapidly being restructured around open and highly-scaled digital collaboration between new network-centric businesses and their communities of users.

The implication, if this summarizes the most significant things happening in work today, is that most businesses will have to come to terms with these transformational changes and restructure themselves around them. Given how rapidly this is taking place in certain quarters, particularly the fast-growing and highly disruptive startups of the collaborative economy, they will have to adapt to this new reality fairly soon.

As I wrote recently, digital communities are upending our organizations, and not slowly any longer. But they don’t have to. There is growing and decent evidence that organizations can make the change, if they are fully committed and pro-active. What’s more, the results seem to indicate they’re very much worth making, if you’re prepared to change what’s necessary.

What Most Digital Strategy Underestimates: Scale and Interconnected Change | On Web Strategy

5 responses to “Rethinking Work In the Collaborative Era”