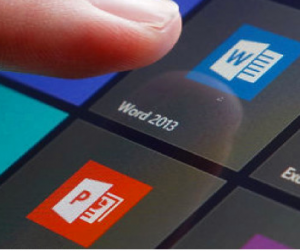 There were many intriguing stories out of Microsoft Convergence 2014 in Atlanta and one that caught my eye was “Microsoft digs into ‘natural interaction’ technologies for touch-first Office” by Juan Carlos Perez.  It was about a coming version of Office that will let people use gestures and voice recognition in Office products running on mobile devices.  Just like in the movies.  Can’t wait.  This will undoubtedly add to people’s productivity and it will begin to liberate us from keyboards (a 1960’s innovation) to enable more natural modes of communication.

I am all for it and in my estimation, if you need an example of how we will reach the goal of humans and machines working together as envisioned in the recent best seller, The Second Machine Age, by Erik Brynjolfsson and Andrew McAfee, this is a foretaste.  But of course there’s something missing and that’s what I want to talk about.

Bear with me but if the script runs true, Microsoft and other companies will release hardware and software products with sensors and the software the analyze their input that will drive these new activities.  Microsoft has a ton of patents in this area, so good for them.  It’s not hard to imagine this future, you can already play Xbox games where the computer senses your presence and movements and responds in kind.  But the script also calls for us to be underwhelmed, confused, and dismissive of the new tools, perhaps because many older executives have not had the Xbox experience.

In a way, gamers and game developers are lucky — they have the context of a particular sport or activity for the sensors to work within.  Golf? Hit the ball. Tennis? Hit the ball.  Ok, there’s more than that but you get the idea.

Business?  What’s the context? What’s the process?  That’s a tough one and it highlights much of the reason for the hype cycle effects we often see when a market that ought to be a slam dunk shows signs of being underwhelmed, confused, and dismissive.

What the hype cycle amply demonstrates and what Brynjolfsson and McAfee point out in their book is that technologies take time to percolate through our culture at least in part because we need to find real life uses for them.  Geoffrey Moore famously described the different phases in market adoption in his Crossing the Chasm series but I am no longer sure that the phases represent actual adoption.  If adoption is more or less defined as a technology’s uptake by users, then I think that’s too broad a definition.  Moore is more on target when he speaks of whole product, the escalating requirement for process, protocols, best practices and what not that make the core technology really fit into our lives.

People and companies buy things because they’re hot and not necessarily because they know how to leverage them.  CRM saw this in spades as, according to my research, only about half of the early buyers actually had a clear idea of what they’d do with CRM once they got it.  The other half bought because they didn’t want to be left out — if there was an advantage to CRM, they’d figure it out.  Maybe.

Even today few people with a new and easy to use product like analytics bother to create novel analytic reports.  They use whatever is pre-defined leaving that exploration for the next generation of users.

At first new technologies are seen as toys that we literally play with while seeking their true use and productivity and I see no reason that we won’t someday soon see Microsoft Touch Olympics played at some offsite meetings.  But personally, I am becoming just a tad “underwhelmed, confused, and dismissive” with possibly a soupcon of bemusement at this ritual.

It would be great, if for once, we tried really, really hard to field test these new, new things and bring to market a limited number of realistic use cases that are by all means limitless in terms of what our creativity can add to them.

This really needs to happen too.  Almost two decades after the introduction of SFA, for instance, half of our sales organizations still don’t have a formal sales process replete with playbooks and support from core SFA.  Half the sales reps still wing it — you’ve seen this before in my writing but it’s true — and you can tell which half is which because the half that doesn’t use a formal process is not knocking down a big W2.

So my recommendation for the touch-civilization in the making, or whatever we decide to call it, is this time, let’s figure out the processes we at minimum want to influence, automate, and enable.  Call it whatever you will.   I just can’t bear the thought of the Instagram photos from an offsite depicting the drunken, midnight Touch Olympics.

One response to “Microsoft’s Touch-First Strategy”