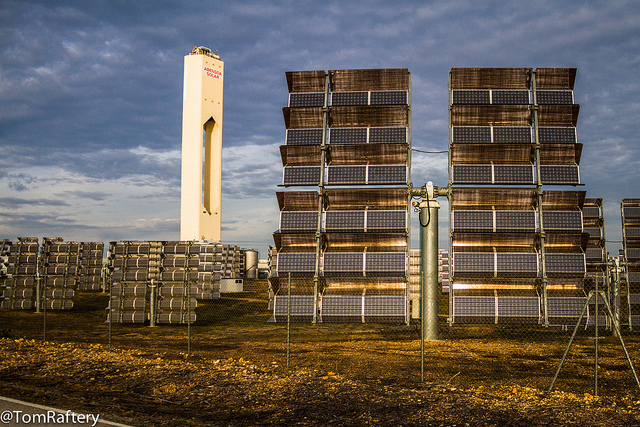 For decades now electricity grids have been architected in the same way with large centralised generation facilities pumping out electricity to large numbers of distributed consumers. Generation has been controlled, and predictable. This model is breaking down fast.

In the last decade we have seen a massive upsurge in the amount of renewable generation making its way onto the grid. Most of this new renewable generation is coming from wind and solar. Just last year (2013), almost a third of all newly added electricity generation in the US came from solar. That’s an unprecedented number which points to a rapid move away from the old order.

To counter this, a number of strategies are being looked at including demand response (managing the demand so it more closely mirrors the supply), storage (where excess generation is stored as heat, or potential energy, and released once generation drops and/or demand increases), and better forecasting of the generation from variable suppliers.

Some of the more successful work being done on forecasting generation from renewables is being undertaken by Dr Hendrik Hamann at IBM’s TJ Watson Research Center, in New York. Specifically Dr Hamann is looking at improving the accuracy of forecasting solar power generation. Solar is extremely complex to forecast because factors such as cloud cover, cloud opacity and wind have to be taken into account.

Dr Hamann uses a deep machine learning approach to tackle the many petabytes of big data generated by satellite images, ground observations, and solar databases. The results have been enviable apparently. According to Dr. Hamann, solar forecast accuracy using this approach is 50% more accurate than the next best forecasting model. And the same approach can be used to predict rainfall, surface temperature, and wind. In the case of wind, the forecast accuracy is 35% better than the next best model.

This is still very much a research project so there is no timeline yet on when (or even if) this will become a product, but if it does, I can see it being an extremely valuable tool for solar farm operators (to avoid fines for over-production, for example), for utilities to plan power purchases, and for grid management companies for grid stability purposes.

The fact that it is a cloud delivered (pun intended, sorry) solution would mean that if IBM brings it to market it will have a reduced cost and time to delivery, bringing it potentially within reach of smaller operators. And with the increase in the number of solar operators (140,000 individual solar installations in the U.S. in 2013) on the grid, highly accurate forecasting is becoming more important by the day.

One response to “Here comes the sun… IBM and solar forecasting”