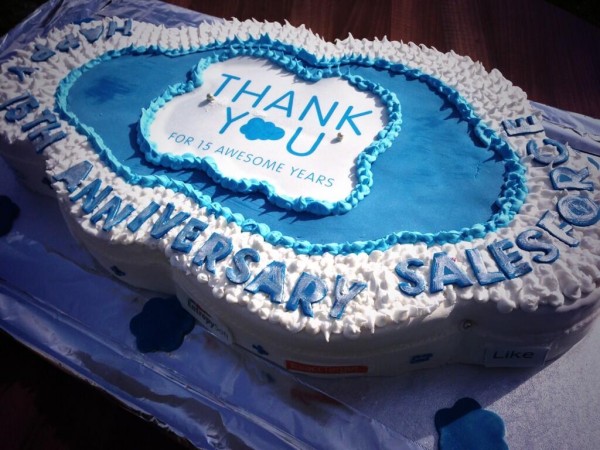 Fifteen is an interesting anniversary.  We tend to think about major anniversaries in ten-year increments with the five-year internode acting more as a gut check.  Fifteen is close enough to the creation that all of the relevant parties are still around and most are still in place.  But it’s also far enough in the rearview mirror to provide the perspective needed to make judgments.  Salesforce.com is fifteen and celebrating it.

Salesforce was not alone in its niche fifteen years ago and if you recall the time you know that “dot com” was the watchword of the time.  The Internet was still a novel innovation and companies were trying to figure it out as a business tool in equal measure with trying to get straight how to move their sunset manufacturing to ultra low wage places like China and, well, China.  Maybe India too.

My story in relation to Salesforce picks up only fourteen years ago because, fifteen years ago there was nothing much except a business plan and a lot of code to write.  It would take a year for the company to bring a product out.  By happy accident, I joined the analyst firm Aberdeen Group fourteen years ago with a mission to cover SFA.  My instincts have always drawn me to disruptive innovation and I had a notion that I was going to cover hosted deployment models that focused on SFA.  How lucky was that?

I was just getting settled into my job when Salesforce representatives came to Boston to brief the analyst community as part of the company’s rollout.  Having come from a technology sales and marketing background and having directed the development of an in-house SFA system in a prior life, I got it right away, especially the part about subscriptions and being able to access customer data from anywhere that I could get an Internet connection.  I was an immediate fan.

But it’s important to understand that Salesforce was not the only game in town.  There were lots of hosted services offering an SFA product, though today they have all either disappeared or been rolled up into larger companies.  Only Salesforce remains as an independent first mover and it has become a force in the CRM industry largely because of the vision of a core group that includes co-founder and technology guru, Parker Harris and, of course, CEO, Marc Benioff.

Today Salesforce looks like a no-brainer but fifteen years ago it was anything but.  It was going up against some Goliaths with a stripped down product in a market where its only innovation was not the product itself but its delivery and business models.  If it or any other SaaS company was going to survive it would have to steal market share from Goliath.  Not a pretty picture but the stuff of corporate lore and mythology.

It is my firm belief that absent Benioff’s genius for promotion and an iron willed determination to sculpt the future of enterprise computing, Salesforce today would be just more road kill on the (metaphorical) side of Route 101.

But Benioff and a team of believers pulled it off.  He made storing data in the cloud not scary but sexy.  He took on the dominant player in CRM at the time, Siebel Systems, much earlier than I thought practical, with a campaign that featured a little kid writing at a blackboard, “I will not let Siebel take my lunch money.”  It was a brilliant summation of everything Salesforce and Benioff wanted to achieve at the time.  Benioff wanted to deliver an order of magnitude improvement in enterprise software’s dismal cost curve while also making CRM an easy installation that even small and medium businesses could accomplish.

In the process, Salesforce became the primary industry promoter of the subscription model and started a whole economic model that resonates throughout the culture today.  No they weren’t the only ones doing subscriptions, far from it, but Salesforce and Benioff made subscriptions hip and sexy and sexiness drove success.

Salesforce has undergone more self-reinvention than I can count over the last fifteen years.  Actually I can count it.  The company seems to reinvent itself every 2 to 3 years, a torrid pace but one that has brought it to a leadership position in numerous Gartner Magic Quadrants, and the verge of the Fortune 500.

If the company has an Achilles Heel it is the tendency that all rapidly growing companies have of reverting to the mean, becoming average.  In other words how do you keep “La Revolution” going without becoming a self-parody or the Fidel of tech?  Here Salesforce has had incredible luck not only with its serial reinventions, but have you noticed that the company’s reinventions have all involved building products that it needs internally that also happen to be what the market needs too?

Salesforce’s early customers were emerging companies like itself so they needed high quality systems that didn’t cost a lot but that would enable them to compete with the big boys.  As the successful ones grew they needed better ways to communicate and collaborate internally to prevent the stasis and sclerosis that organizations with large populations and rigid processes inevitably acquire.

Salesforce delivered Chatter, its collaboration tool and workflow to automate as many internal processes as possible.  It embraced the social wave with a bear hug that has enabled it to effectively communicate with customers and prospects and it has shown its customers how to use these tools to streamline their operations too.

The company has also paid close attention to IT and application development.  Understanding the disruption that mobility is causing, it has moved to provide development, maintenance, and deployment tools that enable business systems to evolve at rates very close to their underlying business processes.  Exactly what it also needs in its continuing evolution.

While the company might not revert to the mean while Benioff and Harris are running things, it’s worth noting that the mean is chasing Salesforce.  Every major business software vendor, plus a cadre of innovators spotting niche opportunities, is hot on the trail of Salesforce’s innovations.

Windows is effectively dead as a place to run business apps except for its necessity for supporting browsers where most applications run today.  Everyone has a cloud strategy today including all of the nay-sayers of a decade ago who finally gave up being wrong all the time.  Everyone is trying to develop an App Store — a term Salesforce coined before Benioff gave it to friend Steve Jobs and Apple — on that, all I can say is that Benioff is not always right.  Ditto for the emerging ecosystems of partners with plug and play applications.

The list goes on and as if that weren’t enough, there’s philanthropy to discuss too.  Benioff has been one of the earliest and most vocal supporters of the 1:1:1 model of philanthropy that posits donating one per cent each of a company’s equity, people time, and profits to charity.  The Salesforce.com Foundation has become a model in Silicon Valley and other companies have emulated it creating a new force in public giving.  Benioff is also not shy about his $100 million donation to UCSF Children’s Hospital, which will certainly enrich San Francisco and the Bay Area for a long time into the future.

There’s more but it’s enough for now to say that Salesforce.com has made a significant mark on an industry, a region, and even on the way we think of business today.  That’s not bad for a fifteen year-old.