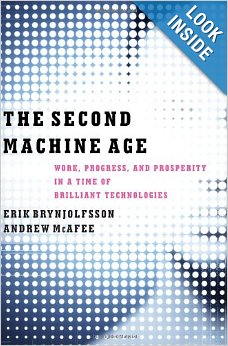 You should check out “The Second Machine Age” by Erik Brynjolfsson and Andrew McAfee of MIT.  It’s a thoughtful analysis of the technology progression handed to us by Moore’s Law and its effect on every aspect of our lives.  Their thesis is pretty simple but also powerful.

Early in the computer age, we developed transactional systems designed to give us the data we needed to make decisions but over the last ten years or so, the pace of innovation has accelerated.  Systems have become increasingly sophisticated and capable of not only giving us the right answers in business, but to manage increasingly intricate business processes.  Processes that were only imaginable before are becoming easy and such is the case with managing people.

One of Brynjolfsson and McAfee’s predictions for the future of business is that technology will become increasingly valuable as a way to augment human abilities and behaviors.  But their analysis cuts through the idea of the all-powerful computer such as the chess playing or Jeopardy! winning cousins Blue and arrives at a more satisfying conclusion that those businesses that do the best job of harnessing humans and computers to work together will be the most successful.

Perhaps a classic example will be in how we manage people.  Given a choice many managers would rather wrangle cats than direct humans in part because incenting humans and following their progress toward a conclusion so that the right reward can be given is a low productivity process full of twists and turns and lost data.

Until very recently, managing people was a matter of supplying goals and incentives to be followed later by tallying the results and calculating rewards. Unfortunately though, the process quickly gets out of hand if managers have many people to manage along with day jobs that come with goals and incentives of their own.

People naturally find the easiest ways to reach their goals like a mouse in a maze goes for the cheese.  So, the end of quarter accounting too often starts with reminders of the original goals and back of the envelope calculations to derive percent of attainment.

Such is a “good” system.  A less than good approach is to forget the beginning incentive and goal setting and to arrive at a bonus amount that is bestowed less as a reward for meeting the goal than as manna from heaven.  No wonder that motivation sags in many businesses.  People don’t really know what’s expected of them and good work, while hoped for, is treated as a miracle rather than the result of a plan.

That’s the way it has always been but it can change now because systems are becoming generally available that combine the number crunching and data gathering capabilities of technology with the right brained, creative, goal setting and motivational talents of real managers.  In other words the MBO can now be much more than an aspiration learned in business school and promptly shelved in the real world.

Teaming managers with systems that actually aid in management processes and not just calculating results can turn the difficult and time consuming people supervision process — including goal and reward setting — into a rigorous and time saving science.  More importantly, using systems that manage MBOs has another benefit.  Rather than waiting until the end of a reporting period to ask, “How did we do?” managers can now ask the more useful question, “How are we doing?” at any time in the reporting period.

The obvious benefit of this approach is the possibility of knowing where things are succeeding and where the sledding is tougher in time to intercede.  This is managing by exception, one of the more useful tactics that managers are tasked with.  But now, leveraging appropriate systems managers can actually intercede where their efforts will do the most good and they can do it on a consistent basis.

All this suggests that in the second machine age we might reconsider and reconstruct the very idea of work.  Well-tuned goals and incentives can be managed anywhere any time with less emphasis on employees reporting to a building every day or working these hours or these days but not those.

Best of all, because it will make this new paradigm more palatable to all parties, research shows that directing as little as 3 percent of employee compensation into well managed MBOs is enough to move the needle.  The key is managing well.  Employees quickly go from gaming a system imposed by others to strategizing how to maximize a set of incentives constructed expressly for them.

The second machine age will be a time for recalibrating the relationships between people and computers, work and life, and among people.  Goal and reward setting will be small ways to do some of this but its impact will be great.