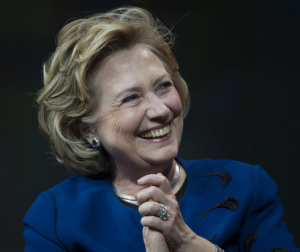 Day one of the Marketo Marketing Summit 2014 was highlighted by a speech by possible presidential candidate Hillary Clinton who spoke about the intersection of social media and the Internet during her tenure as Secretary of State.  Clinton is no technological light weight and gave example after example not only of how the State Department adopted modern communication methods, but she also showed where we collectively as a technological society need to go in not only communicating but in leveraging technology.  As a speaker she graciously stayed on the topic, innovation as applied to marketing.  Perhaps that’s not her sweet spot but she stuck with it and it impressed the audience.

Marketo CEO Phil Fernandez was happy to serve up a mix of hardball and softball questions in a discussion after Clinton’s speech, which she handled with good humor, even the inevitable are you running for president question.  Here I thought Fernandez got further than most professional journalists whose questions have been successfully parried by the non-candidate and Democratic front-runner.  Answering Fernandez Clinton said she was “Thinking about it.”  Such is the stuff of reading political tealeaves.

If you ever doubted Clinton’s appeal you should have been in the mostly female audience for whom Clinton is something of a hero and a role model.  Her comments were designed to appeal to the audience of mostly center left people and women.  For instance, when asked about immigration and jobs her response was a measured, let’s form public-private partnerships.  And although that’s a good idea, it skirts somewhat the larger issue of getting the economy moving again.  I would have liked a response like that but then again that’s the kind of thing a candidate proposes, not a private citizen.  Alternatively, perhaps that makes me somewhat left of left.  I dunno.

Day two starts shortly and I expect to get more detail on Marketo’s many announcements.