Charles Phillips, CEO of Infor, is a sharp dresser. His lean frame and his attention to detail (he has designed his own shirt collars since he was young) certainly help. At dinner he politely explained to a few curious analysts his sartorial style. And yes, that has helped him in the sales process with executives of several well known fashion brands around the globe.

Of course, his clothes could not by themselves helped Infor sell large software deals to these companies. Infor has long had unique apparel and footwear functionality such as dimensional support (style, color, size, other configurations unique to that market) via its Intentia products. Add to that contemporary functionality to support omni-channel requirements and agility in the supply chain needed for faster fashion turns and cloud technology it has invested in.  Add the design aesthetic of its in-house agency, Hook & Loop which clearly clicks with fashion executives. Add industry savvy executives it has recruited and the mix is a winning formula.

At its Innovation Summit in New York this week we heard variations of that formula applied to several industries – what they call “last mile” discussions in those sectors. They leverage assets Infor has acquired, newer ones it has developed, talent it has recruited and partners like Cerner in healthcare and Ciber around non-profits.

Take the US healthcare sector. While much of the attention has gone to the Obamacare rollout, the industry is  in massive turmoil. Providers are acquiring each other, they are moving into payer turf and vice versa, private equity is investing in the sector. Infor is leveraging hospital functionality and customers it acquired via Lawson Software, recruited a Chief Medical Information Officer and plenty of other healthcare professionals, and is developing new functionality as the sector comes under significant financial scrutiny and for patient safety and clinical transformation. Hook & Loop showed off  UI aimed at new ways of looking at patient data. 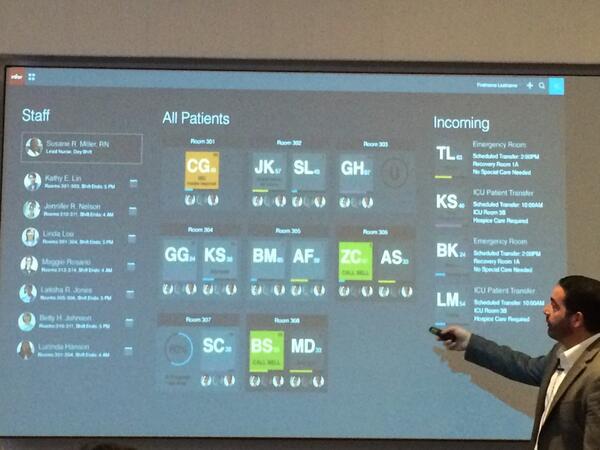 Charles told us about a dealer network functionality – covering aspects of field service, leasing, complex asset management – it has been developing for Caterpillar. This should be attractive to a number of other companies with similar networks around complex equipment like Deere, Komatsu etc. That one has a feel of a custom developed solution, and I asked Charles if that was of interest. His response – they generally develop or acquire new functionality which is leveragable  across hundreds of customers.

Often that means cutting across industry lines which share some common traits. So, their recent PeopleAnswers acquisition has traction in labor intensive industries such as retail, healthcare and hospitality.

At other times, it means customizing components to industries. So Hook & Loop is looking at beacon and proximity sensor impact on retail, and wearable technology for sectors with field service needs

Often it means a vertical focus is really a congregation of many micro-verticals. So the government focused section of the day talked about federal, state and local agencies. But it also talked about educational institutions, libraries (such as that at the Vatican) and science labs (large ones like CERN and Lawrence Livermore)

The day also had plenty of sessions on ION, the Infor middleware, its mobile, social and other technologies, its growing reliance on Amazon Web Services as its cloud infrastructure and other architectural elements of the Infor stack. While other analysts focused on the portfolio rationalization the new management has accomplished – go forward focus on M3, S3, LN & Syteline – and some fretted about Infor’s heavy debt load, I kept getting reminded of the “Small World” ride at Disney World.

Just substitute regional costumes with aprons, hard hats, mannequins and other industry-specific accoutrements.  Infor is skillfully leveraging its wide portfolio of technology, people, partners and customer assets to go the “last mile” in many sectors.