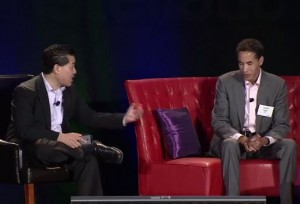 I attended the Infor Innovation Summit in NYC last week.

It was a good event, headlined by Infor CEO’s Charles Phillips and most of his senior staff.  There were lots of presentations – but also oodles of conversations and questions with the ~60 analysts in attendance (from all walks of like, independent to large research house).  Anyone who has a say in the world of Enterprise Software was there (and, yes – the agenda was a cute attempt at civility, we were behind schedule just 10 minutes into it).

My attention was piqued in the last couple of years as I saw Infor progress from a collection of acquisitions to putting a credible story together.  I wanted to see what was the glue holding all this together, how it fared as built, and how it compares to the rest of the market.  I was not disappointed, Infor delivered all the information needed to make this assessment.

What? The title you say?

I am in the middle of my oldest daughter’s awakening into a teenager.  Thanks, I appreciate the sentiment – as I hear, it passes in another 15-20 years.

I may be biased coming into this, but I am seeing similar behaviors and issues with Infor as I see in my daughter: all the elements that would make them a great vendor are there – just not all in the final form or matured enough.  Let me explain.

Infor has in my opinion the most advanced architecture for cloud I’ve seen among large #EnSw vendors.  It can support any “model” of cloud their customers throw at them – but this is mostly because they had the good fortune / foresight of re-architecting in the past few years from a non-existent platform that held it all together to a great three-tier, metadata-based (and this is the key, btw), public cloud that can also bastardize itself to be private or hybrid if their customers are not yet that advanced in the cloud world (something that will be solved in the next 2-3 years more or less).

Further, their ION EAI layer is one of the best answers I’ve seen from vendors to bring legacy solutions into the new world of cloud; it does the job well and the clients I chatted with like it and see it as a great interim step to move forward into the world of cloud.

They really thought about it, and the platform is well built and being adopted at a good pace by existing customers migrating from the old products into the new platform; we shall continue to see this if all my conversations are any indication.

They also distinguish themselves from other vendors by their UX (uber friend Paul Greenberg discussed this in detail in his post last year about this, read more there as I won’t be as detailed).

Using their Hook-and-Loop (I am a brand-killer, I am sure they don’t use the name that way, but works better for me – sorry) agency they have some of the most amazing UI I have seen for Enterprise Software in many years if not ever.  Mobile, desktop, tablet – all well covered and retaining the main attributes of the interfaces.  The ability to build and modify interfaces easily also supports the move to adopt mobile as the leading platform by most organizations.  All in all, definitely a key differentiator for them if not the best.

This to me is the equivalent of a teenager that takes care of their appearance (starts working out, stops eating junk food, buys more fashionable clothes, spends 2 hours every morning doing their hair – I mean, seriously? at 11? — sorry, I digress), begins to understand their likes and dislikes, their preferences, and puts a good amount of time into deciding what their looks are and how the world should see them.

And this is who I see Infor today: a teenager.  All the elements are there, they are lean, buff, and decided.  They have all the components that make up who they are – but are not yet ready to use them all together in critical situations.  They are learning (And having great successes in areas like Public Sector and Healthcare) what they have and how to use it, how to learn from the early mistakes and how to get better.

Infor, the teenager, has a great future as an adult if they continue on this path.  Will continue to watch them over the next few years to see where it goes.

disclaimer: Infor is not a client, but they paid my expenses for this trip, fed me (quite well actually), and took us on a private tour of the Modern Museum of Art in NYC – one of my faves.  Although they did not influence me by doing so, they came as close as anyone can – for future reference, sushi dinner would’ve come closer – but this was pretty good experience.  We were “housed” in the Gramercy Park Hotel, which was OK, but nowhere close to a fave… still food, and museums, rule over hotels in my book.