Located in a prominent position on the wall of Infor’s New York headquarters, is a large graphic that says, “No Fugly Software.” It is a summary statement of the company’s ongoing effort to define a unique cultural identity that links design to improved outcomes and experiences for customers. 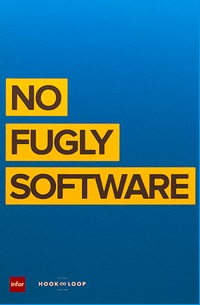 No Fugly Software graphic in the Infor office. Photo by Michael Krigsman.

Infor is a sleeping giant among enterprise vendors; with nearly $3 billion in revenue, the company calls itself the largest private technology company. However, despite this size, Infor does not have the name recognition of competitors such as Microsoft, IBM, Oracle, and SAP.

In public presentations and private conversations with executives such as CEO, Charles Phillips; President, Duncan Angove; and Chief Creative Officer, Marc Scibelli, the clear picture emerges of a company rethinking design as the center of basic activities such as product planning and development.

In this case, however, the term “design” is somewhat misleading because it implies simplistic focus on the layout of graphical elements such as font, color, and other visual components of a page.

For Infor, design has a much broader meaning that includes engaging intensively with customers to understand their business goals, at a strategic level, but also diving down to specific tasks that employees, workers, and other stakeholders perform.

Accordingly, Infor’s team conducts detailed analyses with customers, packages key features based on discovered needs, and creates screens that reflect customers’ jobs and priorities. In some cases, this process results in re-imagining how to present information, even in well-established business environments. For example, the following screen shows the prototype for a modern nursing station in a hospital:

For Infor, design is therefore a euphemism for the broad collaboration associated with distilling processes and information down to what the user really needs, presenting that information in the most compelling and useful manner, and making it all look and feel good. Empathy for the user is central to this process.

Although other large software vendors, like SAP, have embraced this kind of design thinking, the extent to which Infor is retooling both products and corporate culture around design appears unrivaled among companies of its size. As I noted on Twitter, Infor is actively trying to incorporate design as a core strategic theme into its cultural DNA.

During a presentation to analysts, CEO Phillips described the company’s top two market differentiators as deep vertical expertise and “beautifully designed user interfaces creating experiences people love.” Likewise, Infor’s website uses the prominent tagline “Beautiful business software for your business processes.” The company is presenting a message of design to both customers and its own employees.

Driving design as a key dimension of corporate culture. As the photos below show, Infor’s offices reflect a deep interest in design sensibilities. Although one may dismiss any fancy corporate headquarters as being just a facade, this HQ structure serves a very specific cultural purpose.

The office layout brings Hook and Loop into closer physical proximity to Infor’s senior executives than any other corporate function; closer than accounting, finance, marketing, engineering, and so on. This physical layout indicates the extent to which leadership wants to drive home the cultural message that Infor prioritizes design at an executive level.

Aside from using physical space to send a social message, this proximity has the practical effect of connecting Hook and Loop’s design team more closely to management. Although highly pragmatic for a company that prioritizes design to such an extent, it is unheard of among most $3 billion software companies.

The open seating layout at Hook and Loop extends to senior management. This photo shows CEO Charles Phillips and members of his team in their shared workspace. Once again, this arrangement makes the cultural statement that collaboration begins at the top.

Building user-oriented design thinking into core processes such as sales, software development, and consulting. Although Scibelli insists his team are not “design police,” Hook and Loop has significant influence over Infor’s internal processes and customer-facing deliverables. For example, processes such as developing customer proposals require sign-off from Hook and Loop.

Although building Hook and Loop into process workflows may sometimes slow things down, Infor sees this as a necessary part of ensuring that deliverables meet set standards for communication and quality.

I asked Scibelli what happens when people in the organization resist the extra steps or time required to meet this focus on design thinking and process. His response: “Charles and Duncan remove road blocks with passion.”

It is worth nothing that adherence to standards of usability goes far beyond typical corporate style guides. In fact, the corporate branding function at Infor lies outside Hook and Loop.

Rewriting core software applications in accord with the broad design principles and business interactions advocated by Hook and Loop. Ultimately, Scibelli told me Infor hopes to “connect user needs to software design and software APIs.” It is a goal that expresses the desire to embed user needs as the fabric underlying applications and the basic software platform.

The consumerization of enterprise software has become a basic tenet among enterprise vendors and Infor is certainly not alone in investing in design. Parts of SAP, Microsoft, Oracle, to name three, are doing excellent work in this area.

But, to my knowledge, there is no comparably large software vendor attempting to transform itself with design to this degree. For Infor, design transformation is a strategic priority for its senior executives.

However, despite the fanfare Infor has not yet released metrics that link design to concrete improvements in user adoption or other financial measures. On the hand, it is hard to argue with the company’s recent record of financial success, which is certainly based on a number of factors including the new approach to software and design.

Disclosure: Infor paid part of my travel expenses to attend their analyst event in NYC.