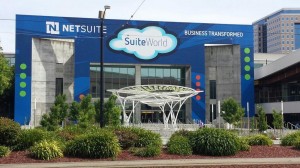 Zach Nelson, CEO of NetSuite, was talking about CRM a lot in his recent keynote for SuiteWorld, his company’s user meeting that was held in San Jose last week. You might not think that’s unusual given that the company has a whole suite of cloud-based ERP-CRM-eCommerce, but it represents a departure and one that I don’t even know Nelson is fully aware of.

NetSuite built its reputation and a half billion dollar business around the idea of front to back office integrated systems delivered through the cloud, and Nelson is the first one to say that integrated is a poor word choice since the two major components are built on the same code base and data. They were never separate so how can they be integrated? Nevertheless, the company has always made its money on its ERP system, which is comprehensive and a serious competitor in the space. So it was interesting to me to hear so much discussion about customer orientation and the importance of customer experience — things that are common in a CRM discussion but medium rare in ERP.

The primary link between front and back office for NetSuite has always been eCommerce for the obvious reason that it exposes a company’s back office directly to the customer. My friend Esteban Kolsky last year debated Nelson on his assertion that ERP was the “real” CRM because it contained information about customers. Nelson’s assertion sounded hyperbolic to me and I said so in a post at the time.

But this year’s assertion was different. It was more nuanced and brought in not just customer data but also customer experience and all the other soft-benefit words in vogue, hence my surprise. It is important when an ERP vendor, or a vendor fundamentally exposed to the ERP business, decides to take on the language of the front office because, for me, it signals an interest in adopting a more process-oriented view of customer facing business than is typical of ERP.

This is big in my mind because it says ERP might at last be getting in line with CRM on the customer focus level which is, I think, necessary for the overall success of the front to back office integration. Let’s face it, it’s really, really hard to organize the front office for a marketing process, a sales process, a service process, and still have the back office doling out data a la transaction.

One place where this all synchs up is at subscription billing. We may have traditionally thought of billing as a transaction par excellence, but in the subscription era, it has become a system of engagement, a place where customers converge on a vendor for much more than correct invoices. In subscriptions, vendors lose some amount of direct customer contact and the billing process can be an important source of customer uptake and use data and it can be one of those touch points that best informs customer service. The important part of billing is that it can replace some of the contact lost in other forms of communication. It was no surprise therefore, that NetSuite introduced an enhanced version of its subscription billing solution at the show.

That’s all good news in this regard. But as things go, NetSuite seems to be still trying to get its customer-centric messaging right, in my opinion. For example, they still refer to transactions and systems of record when they more appropriately mean processes and systems of engagement. If you’re going to start talking about customer-centricity there’s no halfway point, you need to show that you are in it, that you get it.

Such is the situation many vendors find themselves in when changing models, even slightly and NetSuite should be applauded for its move to engagement, so I am not complaining. But the move needs to be made quickly and crisply. We live in a subscription economy today, for sure, but more important is the fact that the economy has spawned a subscription culture in which even if you aren’t actively selling subscriptions, your customers are expecting subscription class relationships. These relationships are more intimate, solicitous, and above all data capturing and analytic.

An ERP system that gets this is going to be one that injects its back office data more freely into front office processes to better inform them about customer needs. NetSuite isn’t all the way there yet, but they are the ERP vendor that has perhaps gone furthest in making the connection and for that alone, it was good to be at the keynote because it provided a tantalizing insight into the future.