Digital transformation: CIO / CMO and the crisis of confidence

A few years ago, Gartner analysts predicted, “by 2017, the CMO will spend more on IT than the CIO.” As you can see from the opening slide on their presentation (registration required) about the topic, Gartner trumpeted this prediction loudly:

Although Gartner phrased its prediction to gain attention, the detailed explanatory presentation offers vague and rather inconclusive data to support the core assertion. In fact, during an episode of CxOTalk, Gartner Fellow, Mark P. McDonald, told me he was somewhat uncomfortable by the whole thing; if you are interested in background about that famous Gartner prediction, the conversation is worthwhile.

Nonetheless, it is clear that marketing technology will consume higher budgets over time, and a quick look at Scott Brinker’s Marketing Technology Landscape super-graphic tells the story. With so many companies and segments related to marketing technology, it’s obvious that this is a rich and important field. Click the graphic itself to see a huge version: 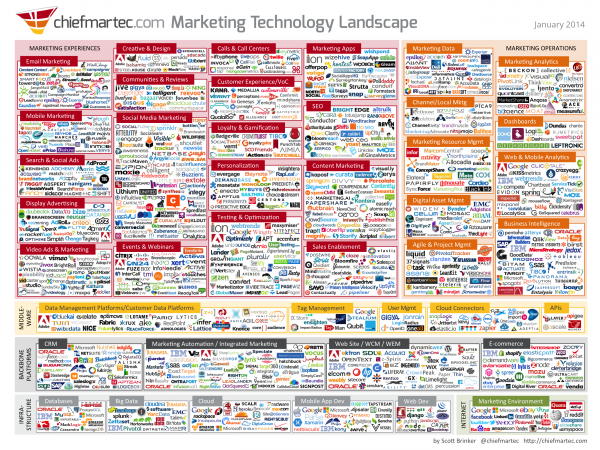 With the Gartner prediction as background, I was intrigued to learn of two recent research reports, from unrelated sources yet describing similar results, that add color to the breakdown of technology spend outside IT.

The first study, from technology consulting firm Avanade [PDF], explains that 37 percent of “budgets allocated in 2014 for technology investments are now controlled by departments other than IT.” Some important results from the Avanade survey:

Avanade based its research on a survey of “1003 C-level executives, business unit leaders, and IT decision makers.”

The second study, from CEB [PDF], which describes itself as a “member-based advisory company,” claims that “business executives now spend an additional $0.40 on technology for every $1 managed in the traditional corporate IT budget.” Key points from the CEB research:

The CEB study included 165 organizations responding. A breakdown by function for technology spending outside of IT is shown below:

IMPLICATIONS FOR THE CIO

It is obvious that technology spending outside IT is happening on a large scale. However, there are two, more subtle, implications:

We are entering a period of digital transformation that will take years to play out. Although fundamentally about business, the digital transformation journey relies on platforms, networks, and technology as crucial enablers. At this early stage, indicators suggest that business leaders have lost confidence in the CIO’s ability to solve problems and deliver innovation quickly and efficiently.

Without CIO leadership and intervention, this trend is likely to continue.

[Disclosure: Avanade is a client]