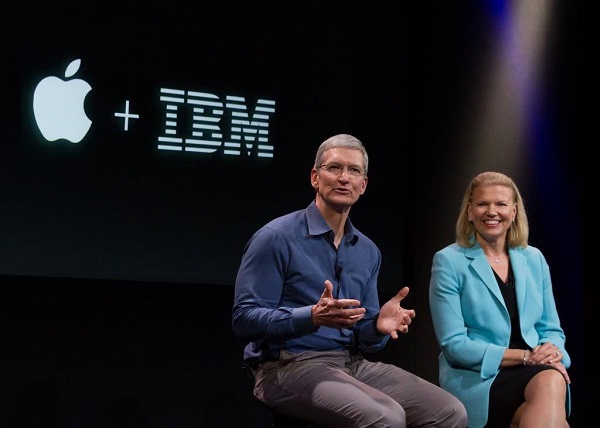 On July 15 IBM and Apple announced an exclusive partnership.  There are several components to this partnership that have been addressed elsewhere (here and here) but of most interest was the commitment to develop 100 industry-specific mobile analytic applications.  As I had written, the broad adoption of smartphones and tablets by employees, customers and partners, combined with a BYOD strategy, is driving corporations to rethink their enterprise application strategies.  They are starting to mobilize existing applications and embrace a mobile-first approach for the new applications they are licensing or developing internally.  Analytics-based insight-generation applications represent a major category of these new applications. Recognizing this trend, I and many other venture investors, have been aggressively funding startups that develop mobile enterprise applications.

To better understand why IBM would abandon its multiplatform approach and create such an exclusive partnership with Apple one needs to separate the enterprise mobility strategies from the corresponding BYOD strategies.  It has been widely reported that shipments of Android devices has surpassed those of iOS devices.  This would imply that more employee-purchased devices would run on Android.  However, for a variety of reasons, (such as a) single version of the operating system compared to Android’s fragmentation, b) application manageability and security, etc.), mobile devices purchased by enterprises tend to be iOS-based.  Corporations in industries such as pharmaceutical, retail, financial services, transportation and logistics, hospitality and health care have been purchasing iOS devices aggressively.

This partnership brings together two capabilities important to the enterprise.  First, it is IBM’s industry-specific knowledge of mission-critical enterprise business processes and IT infrastructures with the corporation’s big data analysis prowess.  Many mobile enterprise applications will require different security and integration characteristics than consumer applications.  IBM is very familiar with these and can provide them in the new mobile applications that will be developed under this partnership.  Second, it is Apple’s mobile device and user experience know-how.  In doing so, the partnership has the potential of great immediate and long-term success by delivering a new generation of innovative mobile-first or mobile-only insight-generation enterprise applications.

Of course, IBM and Apple are not the only companies that have recognized the corporate need for mobile analytics and insight-generation applications.  Several startups such as RoamBI, TopOpps, RetailNext, HelpShift have aggressively been developing such applications using venture funding.  However, none of them could compete with IBM’s industry-specific knowledge of mission-critical enterprise business processes. It is too early to tell how the IBM/Apple partnership will evolve but it does not have to be competing with startups.  In addition to benefiting the two companies, it has the potential of also benefiting startups at the very least by raising enterprises’ awareness for mobile analytic applications.  But if IBM and Apple develop open mobile applications and infrastructures, then they will be able to also collaborate with relevant startups and create a rich application ecosystem with the potential to further accelerate the mobilization of the enterprise.

For the application development component of this partnership to prove successful for IBM, the corporation must:

IBM and Apple tried partnering in the past.  Those partnerships had mixed results.  Today’s enterprise mobility needs in general and those of applications in particular bring these companies together once again in a partnership that has high potential for both, but also carries high risks.