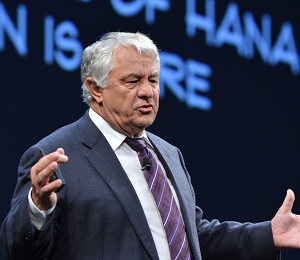 Dr. Hasso Plattner has written a long blog post about Business Suite on HANA. He has 12 reasons justifying why. His passion for the product screams through the post.

I wish he would make it a Baker’s dozen and add a 13th point: that SAP plans to change its business model around HANA.

I am writing a book on the SAP economy so dollars and euros are high on my mind. In the last couple of years, as the Big Data phenomenon has taken off,  I have been impressed with all the fresh economic models I have seen.

So, when GE announced its Industrial Data Lakes recently, I spoke to Bill Ruh there. GE is looking at exabytes of data from its aircraft engines, turbines, locomotives, medical scanners and other industrial equipment. GE’s big driver “How do we reduce by orders of magnitude the cost of managing a terabyte of data?” That led to some radical rethinking of data structure, ingestion  and management I catalog in the book.

In the last year I have talked to entrepreneurs like Nader Mikhail at Elementum,  Omar Tawakol at Bluekai and Adeyemi Ajao at Identified. They have no interest in selling software or hardware. They want to sell you supply chain, marketing and HR data, or even better insight, as a service.

I have seen communities of data scientists emerge at Kaggle and at Topcoder (part of Appirio). It is a new talent sourcing model.

In contrast, SAP still wants people to buy software. Then buy hardware and services from its partners. Beyond 4TB of memory, commodity components don’t scale, so that is not cheap. As someone pointed out “With data volumes exploding, will we need to look at IBM’s custom made 128TB Blue Gene/Q supercomputer? And have to use IBM’s traditional talent model?”

With the HANA cloud, you could argue SAP is moving to a new business model. Not quite. Sit down with two displays and open up SAP’s and Google’s data center web pages. SAP emphasizes privacy, security and data protection (all important, even more so to German and other EU customers). Google focuses on data center innovations – efficient servers, container design, carbon neutrality among other initiatives. SAP is just beginning an efficiency journey that Google has been on for over a decade.

The other challenge with the HANA cloud is customer connectivity. Amazon Web Services with its Direct Connect and Microsoft Azure with AT&T’s NetBond have tried to combat the MPLS and WAN costs carriers charge individual customers. SAP customers do not have such an option.

HANA as an OLTP platform – SAP is actually regressing its business model. To give customers database portability, R/3 kept away from stored procedures and other database specific features. To boost HANA TP performance it will have to move increasing amounts of code away from the application layer.

Over the course of my interviews I have heard many customers say HANA economics are not compelling – even the ones which are early adopters and have good use cases. The recent ASUG survey emphasized the point in spades.

Dr. Plattner don’t ignore all that feedback. Add a thirteenth point to your value proposition – a compelling business model to cover your software and your partner’s hardware and services costs.