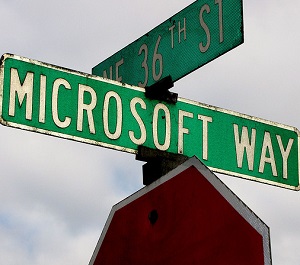 Mike Ehrenberg, CTO for Microsoft Business Solutions was describing his new CEO Satya Nadella’s management style – the senior leadership team meets twice a week. “It plays havoc with planning international trips, but allows us to iterate rapidly as a company”

Kirill Tatarinov, EVP of the Business Solutions group says they have moved from Steve Ballmer’s “hub and spoke” management style to much more of a “connected tissue”. It’s allowing Microsoft to evolve to a “single P&L”

Sidebar conversations during the Fall Analyst Event this week showcased the evolution of “One Microsoft” that I had described here. I like to write about Polymaths and Microsoft is a formidable one with competencies in

Of course, analysts like to carve the market into neat acronyms, and most customers still buy discrete pieces of technology, so the event mostly showcased Microsoft Dynamics ERP and CRM customers and product evolutions. In a q&a, Satya invited us to keep reminding Microsoft about the broader opportunity and under non-disclosure we heard of newer examples similar to Delta where Microsoft had pulled together retail, mobile, cloud technologies to deliver their in-flight POS

What was nice was even the ERP/CRM customers who presented during the event reflect a “New Age” economy:

Another changing marketplace is that of IT services. Microsoft showcased a spectrum of 6 partners ranging from from $ 28 million in revenues PowerObjects to ABeam Consulting ( a SAP SI strong across Asia which is doing two-tier Microsoft projects) to $ 100 billion revenue-strong IBM.

Microsoft has invested significantly in lifecycle management tools around its applications and it was interesting to see the enthusiastic attitude about these tools from the smaller partners compared to that of the bigger ones.

Microsoft sells Office and other tools to white collar workforces but it has also seen massive scale efficiencies from machine learning and cloud infrastructures. Satya responded to my question saying “He wants customers to “become software companies” by creating unique, differentiating code and reducing labor needed for back office functions.

That is the another major opportunity and challenge for Microsoft: to prevent a repeat of what bigger SIs and offshore firms did in creating a massive labor intensive economy in spite of SAP’s ASAP , Solution Manager and other tools and methods.

All in all, an invigorating couple of days on the shores of Lake Washington. As a dog lover, I particularly liked the Woodmark Hotel’s resident pets and Trupanion bringing two canine panelists to their session.

I hope  to profile some of the newer “One Microsoft” customer examples on New Florence as soon as the non-disclosure embargo is removed.