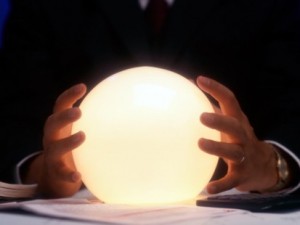 Just so you know, this year, I’ll do even better than last year (notice by adding the word “even” it makes it seem like I did really well last year but will improve over that sterling performance. Looking Back at CRM 2009 Forecast and decide whether “even” is justified or just a psychological ploy). One of the reasons for that is because of refinements to my incredibly good algorithm that drove my forecast last year.  The old version was:

But I’ve been working diligently on the algorithm – you can never be too right now can you? – and I’ve come up with some real improvements that I think can decrease the inefficiency of the forecast by at least 20X what it is today. That would be this:

Of course, this is a HUGE breakthrough in analyst forecasting that I don’t think can be underestimated. Its so big that I’m giving this formula to the world so that you can predict almost anything you want by plugging the specifics into these parameters.  For example, I found that the Mayan calendar is actually off and the world will end in January 2013, not December 2012 as previously thought.

Okay, now on to the forecast. Like last year there are things to note, three to be exact:

Okay, so watch for my invocation of the PIC throughout the year and let’s get ready to rumble (or possibly, bumble)

Jesus, take it away, hombre.

Doing a forecast of CRM trends and vendors success will do is always a challenge in the Latin American market due to the many differences between countries and regions. When you look at Latin America, you need to see it in 5 regions – Brazil, Mexico, Southern Cone, Andean, and Central America/Caribbean. If you look at most of the IDC or Gartner reports regarding the CRM market in Latin America, most of the time Brazil has like 45% of the market, Mexico around 25% and the rest is divided among the other countries. And it is very clear that Brazil owns the CRM market, since Oracle, SAP and Salesforce.com are quite busy selling CRM in Brazil.  The Oracle and SAP conferences last year where done in Sao Paulo and Rio, respectively. I do not see this changing.

The recent Facebook growth in Latin America represents a unique growth for many. This is a good opportunity for CRM vendors to start building Social CRM applications for the Colombian, Mexican and Argentinian markets. These applications need to be specific to each market due to the differences between countries. What I see here is that if CRM vendors do not to start moving into this area of social media, many marketing and digital agencies will close this gap. During 2009 I have seen many agencies producing social CRM widgets, landing pages and web applications which collect customer and prospect data. In 2010, I see this trend to continue, agencies will own the social media and social CRM market place, unless CRM vendors start producing mechanisms to create social CRM applications.

I see growth in this area, but not a major growth in SaaS. I see many companies doing private cloud computing and hosted implementations. The fact that the enterprise data is outside the country is still a security concern.  Some countries have some regulations against this, but at the end, it is a cultural gap and lack of understanding about SaaS. According to a MundoContact’s 2009 CRM and Call Center study (read my review here in Spanish), 22% of call centers in Mexico are using SaaS CRM applications. This figure is due to the expensive upgrades and budget cuts for maintenance fees from the on-premise CRM applications. I expect this 22% percent to increase in 2010.

Tools like SugarCRM, vTiger, Joomla, WordPress and Asterisk will continue to dominate the Small and Medium Enterprise (PYMES – pequeñas y grandes empresas) market. Pricing is key here. These implementations are a mix of SaaS, hosted and on-premise. Most of them are hosted in local data centers in each country. I expect these tools to do very well in 2010 as hosted solutions…