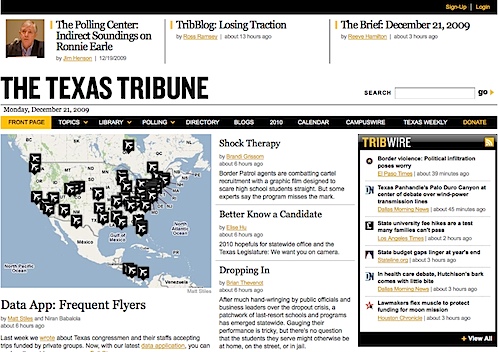 I’ve become a light reader of the newly launched Texas Tribune. Over the years, I’ve tried to follow Texas political news, and it’s either terribly boring, shallow, or too long form. Texas being a state of extremes – you’re either a creationist nut-job or a bleeding heart liberal, both who can’t relate to each other or the Texans caught in the middle who just want to get on with things – it gets even harder to find interesting news that isn’t obviously screwed up with a bias. (Not that I’m a middle-of-the-bird ho-hum – In the Pink ranks high in my local politics reading.)

So far, The Texas Tribune has avoided the usual pitfalls of Texas political news coverage, and they’re Internet savvy enough so as not to be annoying in the mechanics of delivery.
On the web, narrowing down focus is key for a new publication, and these guys do it well. They have a narrow but numerous focus, of course, on state-wide politics in Texas. There’s lots of coverage of school and education, state-wide offices and campaigns. And then there’s plenty of border (Texas-Mexico border) news.

The last is a good example of local and narrow focus: outside of Texas (and the other states that border Mexico), border politics is all about people who want to put up a wall or not. It doesn’t go much beyond that. But here in Texas, border politics is much more nuanced. When your state is as evenly race-mixed as Texas, both culturally and in raw numbers, you can’t really run around freaking out about Hispanics, illegals immigrants, “Mexicans,” or whatever invading. Texas isn’t a purely anglo culture like, I don’t know, Connecticut. A huge page of what defines Texas comes from our Hispanic heritage. To use a trite (well, it’d only be trite to a non-Texan) example, the food of the gods and big bellies: Tex-Mex. It says it right in there, in case you didn’t notice.

Enough of the polemics. The point is, border news is a nuanced topic, namely one that involves actual people not just numbers and stump-speeches. The Tribune is doing a nice job of paying attention to that nuance, which means spending reporter time covering a wide range of stories, like the recent one going over a DARE-like program the Border Patrol does to prevent The Kids from becoming mules for drug traffickers. Can you imagine what a train-wreak that’d become on CNN, MSNBC, Fox, or whatever yell-fest channel you might throw in?

Using the web for news delivery

Looking at the mechanics of that content delivery is interesting as well. The Tribune does fine at using the medium of the web correctly (there’s Twitter and Facebook galore, even), but they also use gonzo-web grade artifacts for publishing. For example:

Their focus is on getting content out, not getting the content in a flashy, overly-professional way. They also seem to have emphasize primary source quotes, first hand accounts, raw data (like the chart), and new that the reader can easily draw conclusions and analysis from, or their own analysis. In much of the Tribune’s news there’s a lot less emphasis on how “important people” are reacting to the news covered and more on what the news is. Internet crowds love this kind of thing: give me the ability (though I’ll probably never have the time to actually do it) to become the reporter and judge the whole story. And be damned what “important people” think, I’ll draw my own conclusions. A sort of reverse gonzo, if you will.

The daily and other frequency summaries and briefing emails are a good way to (a.) keep people (“readers,” but also potential newsworthy individuals) engaged, (b.) create a “pull” desire in readers (“what’s happening today? I have to go look”), and, (c.) a useful summary of political stuff happening in Texas.

They also have a podcast (feed), which I’ll have to check out.