Don’t Be a Metrics Slave 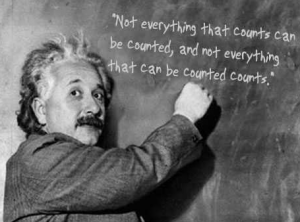 I love metrics.  I live for metrics.  Every week and every quarter I drown my team in metrics reviews.  Why?  Because metrics are the instrumentation — the flight panel — of our business.   Good metrics provide clear insights.  They cut through politics, spin, and haze.  They spark amazing debates.   They help you understand your business and compare it to others.

I love metrics, but I’ll never be a slave to them.  Far too often in business I see people who are metrics slaves.  Instead of mastering metrics to optimize the business, the metrics become the master and the manager a slave.

I define metrics slavery as the case when managers stop thinking and work blindly towards achieving a metric regardless of whether they believe doing so leads to what they consider is best for the business.

One great thing about sports analytics is that despite an amazing slew of metrics, everyone remembers it’s the team with the most goals that wins, not the one who took the most shots.  In business, we often get that wrong in both subtle and not-so-subtle ways.

Here are metrics mistakes that often lead to metrics slavery.

If you’re always thinking critically, you’ll never be a metrics slave.  The day you stop, you’ll become one.

[2] When, thanks to an opponent’s penalty you have more players on the ice then they do.

[3] When, thanks to your team’s penalty, your opponent has more players on the ice than you do.

[4] Because bookings grew slowly this year

One response to “Don’t Be a Metrics Slave”