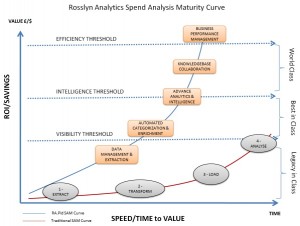 While I plan, over the holiday break, to find as many ways as possible to ignore numbers, charts, graphics, and useful and creative quantitative displays of visual information in general, there was a time earlier in the month when, although overloaded with ideas and information and most in need of a refresh, I still could say “wow” when I saw something exciting. That moment happened during a demonstration of Rosslyn Analytics’ enterprise spend analysis product. Now, I know what you’re thinking: How could yet another spend analysis product cause such excitement, both in the heart and in the head? Haven’t we already done analytics three ways to Sunday, and didn’t Spend Radar and others already come up with a better mousetrap around classification? The answer, of course, is yes. But what makes Rossyln different is not just some of the capabilities of the application ( which are certainly more broad than deep, relative to some other offerings); it’s the fundamental assumption behind what the role of spend visibility should be, and who, within an organization, should benefit from it. ( Hint: it’s not just procurement anymore.)

In Part 2 of this column, I’ll discuss which parties inside a company (other than procurement) stand to benefit greatly from spend visibility; for now, it’s worth mentioning a few of the ways Rosslyn checks the feature/capability box in both conventional and unconventional ways. On a fundamental level, Rosslyn has most of what you’d expect in an end-to-end spend visibility offering capable of competing — and standing alone — in the market. This includes the ability to rapidly extract data from multiple corporate systems with relative ease, greatly reducing the time pressure on IT to nail the prized single-batch extract. From a classification standpoint, Rosslyn automatically classifies data to a UNSPSC standard as a first step (although it has found that this approach is often limiting, depending on a client’s specific needs).