Oracle: Time for some respect 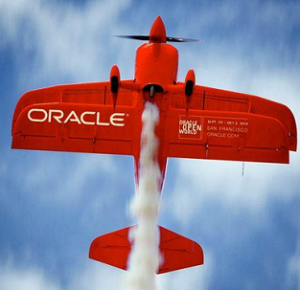 Oracle is skirting with a market valuation of $ 2oo billion. Wall Street is gushing. Whatever. I am not writing this to join their praises – I have never judged companies purely on their financial performance.

I am more impressed with operational metrics which Oracle has been disclosing over the last few months but which just don’t seem to get much play in analyst/media world including:

I am also writing this because  for the last couple of years I have been impressed with the grace with which Oracle employees and executives seem to absorb snarky barbs. It seems like everyone thinks it is ok to take potshots at Oracle.

Example – “Larry missed his OOW keynote for a sailing event”. Hello, it was only one of the most improbable comebacks in any sports – ever. Was Larry not entitled  to be excited? Thousands of sailing fans were. And it was his second keynote in a couple of days. He did not completely abandon his audience.

As I researched for my SAP Nation book, I was taken aback at how many people readily accept the perception Oracle is “evil”. Several asked me if I was focused on the “wrong vendor”.

While the whale was fearsome, many readers would say Ahab
was actually the villain with his relentless obsession and reckless use of his ship and crew in chasing the whale.

As part of my research for the book I had conversations with many of SAP’s  competitors. Oracle executives could have easily given me all kinds of dirt on SAP. They declined to comment. Made me respect them more for taking the high road.

I cannot expect many to magically like Oracle. But it is reasonable to ask we not take needless potshots?