Worldwide cost of IT failure: $6.2 trillion 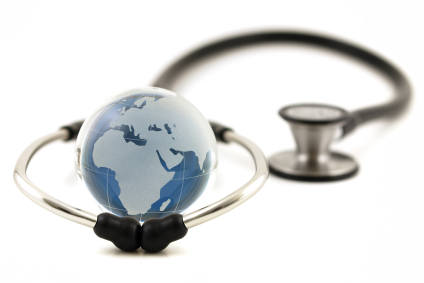 Update 12/29/09: Take a look at this critique of the research described in this post:

Most IT professionals know that project failure is a common and serious problem in organizations of all kinds. New research attempts to quantify the extent of IT failure in the worldwide economy.

Most IT failure research seeks to determine the percentage of projects that run over-budget, are late, or do not deliver expected results. While those numbers are important, they do not convey a concrete sense of the overall cost impact created by failed IT.

To address this issue, Roger Sessions, a noted author and expert on complexity, developed a model for calculating the total global cost of IT failure. Roger describes his approach in a white paper titled, The IT Complexity Crisis: Danger and Opportunity. He concludes that IT failure costs the global economy a staggering $6.2 trillion per year.

Calculations. To determine the overall cost impact of failure, Roger’s white paper goes through a series of assumptions and calculations. Here is an abridged version — see the white paper itself for more detail:

According to the 2009 U.S. Budget [02], 66% of all Federal IT dollars are invested in projects that are “at risk”. I assume this number is representative of the rest of the world.

A large number of these will eventually fail. I assume the failure rate of an “at risk” project is between 50% and 80%. For this analysis, I’ll use the average: 65%.

When thinking about indirect costs, you need to include the costs of replacing the failed system, the disruption costs to your business, the lost revenue because of the failed system, the lost opportunity costs on what that lost revenue could have driven, the costs to your customers, lost market share, and on and on. And you need to consider these costs over the number of years the system would have been functional had it not failed (or at least the number of years until you can put another system in place.)

You can see that indirect costs add up quickly. I will assume that the ratio of indirect to direct costs is between 5:1 and 10:1. For this analysis, I’ll take the average: 7.5:1.

The following table performs this calculation of various regions of the world: 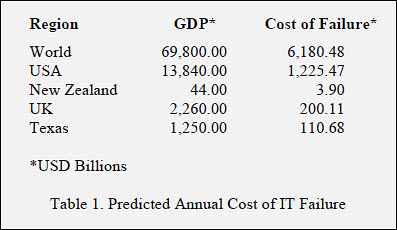 The white paper suggests that worldwide IT failure costs $500 billion per month, a truly astonishing figure. But is this number accurate or useful?

The cost numbers are a SWAG (sophisticated wild-ass guess) illustrating orders of magnitude for the global IT failures problem. Although not precise, the numbers demonstrate the seriousness of IT failure around the world.

Roger acknowledges this in the white paper:

The numbers are estimates, of course. The precise numbers are not the point. The sheer magnitude of the numbers is what is important. As IT professionals we have a responsibility to understand how we can prevent the continuing spiral of failures that is burying us.

The calculations include estimates for lost opportunity costs incurred when projects fail, which is one reason these numbers are so high. These indirect costs have significant impact on the calculations reported in the white paper. Various observers have debated the validity of including indirect costs in the model, although that issue is not yet settled.

It would be valuable for someone to apply Roger’s calculations to determining the cost of IT failure inside a specific corporation or government agency. If you are interested in pursuing that problem, please contact me on Twitter.

My take. Roger’s calculations are a useful measure for demonstrating the extent of IT failures as a problem. Combining these numbers with independent estimates that 68% of IT projects fail yields a compelling and frightening story of IT failure as we approach the start of a new decade.

Update 12/28/09: I’m thrilled this discussion has jumped over to Slashdot. Welcome Slashdot readers!