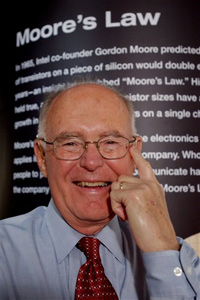 There are rumors of massive layoffs at IBM. True or not, there is no denying the company has had years of consecutive quarterly revenue declines. Poor Ginni Rommety gets the blame, but my view is IBM forgot about Moore’s Law and continuous value improvements as it diversified into software and services over the last two decades. Indian outsourcing vendors should have brought IBM to that realization much earlier but they themselves forgot their own version of CMM Level 5 and Six Sigma driven continuous improvements.  Recent cloud infrastructure price trajectories from Amazon has woken the market again to a core tenet of the technology sector which Moore’s Law first dictated in price/performance of chips. And IBM has to make up for a long stint of forgetting  about continuous improvements.

Unfortunately, IBM is not alone in the enterprise space. Most of us proudly talk about Moore’s Law and have enjoyed it in our gadget/device pricing but have not delivered its equivalent to customers.

Next up is SAP and its ecosystem. In a surreal twist, even as it announced S4HANA, SAP surrounded itself with partners which have not delivered much in the way of improvements since the 90s. If the product is truly revolutionary, SAP should be  parading a new generation of cloud integrators, data centers, crowdsourced communities etc. Instead it risks a similar fate as IBM.

While many enterprise vendors play lip service to Moore, it is good to see other sectors benefit from it. Consumer Reports, not normally prone to giddy outbursts, recently described the state of the US mobile services as

“The good news is that the cellular-service industry has changed in the past two years. Big providers are offering new plans that decouple the cost of monthly service from the cost of the handset, and they are competing to steal each other’s customers. Meanwhile, smaller providers are pioneering new ways to keep costs down—and winning fans as they do it.”

The auto industry is showing remarkable price/performance improvements as I describe here.  Features only available just a couple of years ago in Teslas and BMWs are showing up in much more affordable brands. The pace of innovation and value for dollar improvements is impressive.

Time for all of us in the enterprise space to wake up and evaluate if we have been delivering continuous improvements to our customers. It may take lots of delayering of deadwood as IBM is finding out.