Eating My Own SaaStr Dogfood: Why I Invested in RainforestQA

To keep me honest (in this age of misremembering just which helicopter one was on), I want to continue our small series re: investments where I’ve put more that $1m into a SaaS company, and why I did it as examples of the SaaStr themes and learnings. 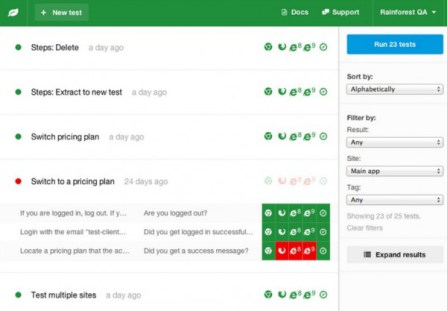 My most recent investment here is a company called RainforestQA.  Rainforest is a very cool company (not at all a good reason to invest) that does something that I desperately needed when I was at EchoSign (almost a good reason to invest):  it can almost completely automate the roles of a functional web software testing team (QA/QE) with a true service.  No need to hire anyone, source contractors, or do anything on the people side.  You just write a plain-English test (click these buttons on my site, etc.) and then Rainforest leverages via its website or an API an army of 50,000+ Uber-like, tested and graded and ranked testers to test every single part of your site — whenever you want, as often as you want.  This hour, every day, the night before a big release, anytime.  With no complaints

Ok that’s great but the truth is it took them a while to make it work.  They launched out of YCombinator in 2012 having just figured out what they wanted to do, with really barely a line of code written.  The project grew in scope, and really, they didn’t have a true Minimum Sellable Product until Summer of ’14!  A long road to MSP.

Not in fact, on the surface necessarily an obvious candidate for explosive venture growth, at least it wasn’t just a few months ago (now it is).  Due in part to how long it took to develop the MSP, they hardly hit Mamoon Hamid’s metric from The SaaStr Annual of $1m+ ARR in the first 12 months from nominal launch (his awesome deck here) … although they will get to $1m+ ARR in < 12 months from launch of MSP, which probably is all that really matters.

And yet, within 20 minutes of meeting the CEO, I agreed to invest.  Why?

I can’t tell you how well RainforestQA will do in 2020.  I’m betting well, but really, there’s a lot that can change by then

Anyone want to take the other side of that bet?