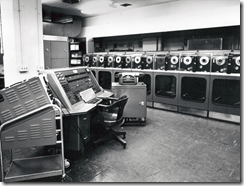 Gotta love the new debate on Tablets – it’s not about the CrunchPad, JooJoo or the Apple Tablet anymore.  It’s about whether we need any.  Joe Wilcox declared that The world doesn’t need an Apple tablet, or any other.

Really?  Well, there was this other guy who famously declared:

I think there is a world market for maybe five computers

He obviously proved to be wrong, but somehow this mistake did not break his career: he was legendary IBM Chairman & CEO Thomas Watson, and the prediction goes back to 1943.  (Too bad the famous quote is likely incorrectly attributed to him – but it’s a better story this way)

I suspect Joe Wilcox will prove to be just as wrong as Thomas Watson (or whoever really said that…).  But I’m not going to argue.. cause I’ve done it a zillion times already.  Hack, I even own the Google search for situational device (but hat tip to Imran Ali who coined situational hardware).   Yes, Joe, the tablet will be a “middle product”, not a phone and not a full-fledged computer, either – and it’s all right. It does not have to be.

How many computers do you have in your household?  None of us would own a monster like the one on the pic – but then computers became personal, and we all got one – for the family. Then we got a few more – 2-3-5 computers are not uncommon in a household.  But what about your digital camera, iPod, iPhone, eBook Reader..etc?  We don’t call them computers, despite the sophisticated processing they all do.

The Tablet won’t be a computer, either. Not in the classical sense of the all-in-one multifunctional machine.  It will be a lightweight, convenient browsing, reading device.  Perhaps a “passive” one – but the most comfortable form of consuming information lying in bed, in a lounge chair, perhaps on a float in the pool 🙂   A situational device.  In fact many situational devices: one for the road, one for the couch, one touch-based, on driven by voice .. you name it.  We’ll have many of those.  Not because we need them. But because we can.  And that’s progress.

CloudAve is exclusively sponsored by