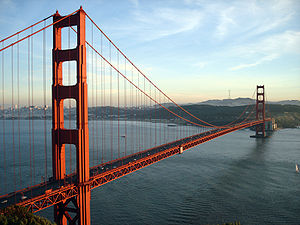 The Merc ran a story today that I have seen run twice already in the Chron about how sponsors of commemorative license plate programs are coming up short, pathetically short, of their goals.

But a proposed plate that would feature a small image of the Golden Gate Bridge and whose proceeds would help Bay Area open space projects has sold only 455 copies, and faces a deadline of mid-July. A second proposed plate, which features a bear and a mountain, would fund projects of the Sierra Nevada Conservancy, a state agency. It has sold only 256 copies, and faces a September deadline.

The answer to the question of why motorists are not reaching into their pockets to fund these plates is obvious to me, the increase in DMV fees imposed last year is draining any desire or ability to fund these programs.

Most people discover these commemorative license plates through the flyer that is inserted into the annual renewal we all receive, and maybe people don’t understand that the only money the DMV gets is for the cost of the plates but it’s more likely that when faced with a vehicle registration tax bill that is significantly higher than what you paid the year before most people simply don’t have another $50 or $90 to give. The pie is only so big, when one slice gets bigger another has to get smaller.