Fixing IT in the cloud computing era

The reality of cloud computing as it exists today already offers significant potential to IT departments that want to cut costs, lighten their infrastructure footprint, and adopt agile new technologies. Whether it’s private clouds or public ones, all signs point towards it being one of the top new approaches for enterprise IT for 2010.

It’s also not inconvenient that this is coming right at a time when traditional enterprise models for IT have come under increasingly sharp criticism for failure to perform, including most recently SOA and just about any kind of “cathedral-style” enterprise project these days.

Most would agree that something needs to change, and the cloud might actually be the first compelling way out of a long-standing conundrum: How can we connect information technology directly to the business in a much more effective and less failure-prone way than we do now? 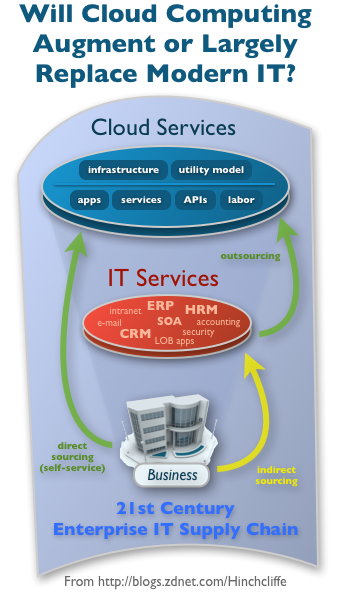 Unfortunately, actual change isn’t necessarily in the air yet, it’s mostly still on the edge at the moment as actual disruption just starts to build up. I’m still seeing little inclination on the ground to change today’s enterprise IT habits despite mounting evidence that they need to. But that may be about to change, one way or another. Cloud computing is increasingly in a position to be a game-changer both as a key departure point and a line of demarcation between the old and potentially new worlds of information technology in the 21st century.

At this point there’s little mistaking that cloud computing itself is a truly potent convergence of SaaS, virtualization, and outsourcing, combined with a pragmatic new utility mindset. Thus it has rapidly emerged on the short lists of businesses looking for ways to improve how they operate their IT infrastructure and applications.

However as we’ll see shortly with some of the latest industry discussions, we seem to be at a major fork in the road: Will cloud computing “merely” help organizations achieve economic, efficiency, and waste avoidance goals, or can it successfully drive even more strategic objectives like effective IT/business alignment, genuine business agility, and the achievement of meaningful new levels of innovation?

Some might say that there’s an even more fundamental question to be answered in this discussion:

Will cloud computing help businesses acquire fundamentally better IT solutions? Ones that solve their real problems in a timely fashion and without budget-breaking and career-impacting delays and risks? There is some urgency to this question not just because businesses are trying particularly hard to perform better or even just recover in the current economic climate. For the first time (or second time if you count the original personal computer revolution), both businesses and workers are now faced with real alternatives to how they acquire IT solutions.

One emerging force at the moment is so-called shadow IT. This is an increasingly common phenomenon in today’s workplace and represents up to 15% of IT already in some organizations according to Forrester. This often nearly free and surprisingly high-quality IT has become available from a vast number of sources lately, particularly through online and mobile channels. They frequently can’t be dealt with adequately using current compliance strategies and are becoming a significant presence in many organizations.

Related: The cloud computing battleground shapes up. Will it be winner-take-all?

In this way, the discrete fork in the road between cost/efficiency and strategic opportunity might now only exist as concept in centralized IT planning as cloud apps do an end-run. In truth, one of the cloud’s biggest implications is that it is enabling (and “empowering” if you like) anyone to self-service with the software, business solutions, infrastructure, and other computing services that they need, more easily and readily than any other source, including their own IT department.

This poses a dire quandary for IT planners and strategists: Join ‘em or fight ‘em? At the same time it can be truly enabling for business users even if, at least according to some, it also puts them on a slippery slope towards potential technology anarchy. The point: Businesses are often the ones reaching out for IT solutions that are increasingly formulated for their direct consumption as a service.

Is it about people or the cloud?

Fellow ZDNet blogger Phil Wainewright made some important points on this topic, which he is starting to call People-Oriented Architecture, earlier this week in “People-centric IT for a new decade“:

I believe we’re at a breakthrough point precisely because technology has matured to the point that it’s flexible enough to be adapted to what the people who use it are trying to achieve — to empower them to refine the automation and processes that help them fulfill their roles as effectively as possible. We no longer have to ask people to change their processes to fit in with the demands of punch card runs or application stovepipes or implementation and upgrade cycles. We now have information technology that’s sophisticated enough to fit in with how human beings work and behave, and that’s why people-centric IT is a defining theme for the new decade, requiring information technologists to develop new skills and ways of working that deliver results the people demand.

I’ve been bullish on people-guided IT for several years now with concepts like end-user mashups and other self-service software models such as today’s highly configurable and easily customizable SaaS applications, especially the new business-focused peer production models like Social CRM in which people are the app. So Phil’s point is important here because all of these trends, particularly as they are embodied in today’s self-onboarding, “instant-on”, open, data-portable, viral, social, and disruptively unblockable cloud services. Not that all cloud computing systems have these attributes of course, but they tend to be based on often hard-to-govern Web (and increasingly mobile) technologies and design models.

You can broadly call this the consumerization of IT or the democratization of the enterprise, but the on-demand, utility model of computing combined with the seamless presence of today’s Internet within most organizations poses a clear challenge to traditional IT. It also points clearly to a — likely irreversible — slide into decentralized, lightweight, Web-oriented IT and what some are now calling emergent architecture.

As I mentioned above, the discussion of how to get enterprise systems to meet business needs is heating up…