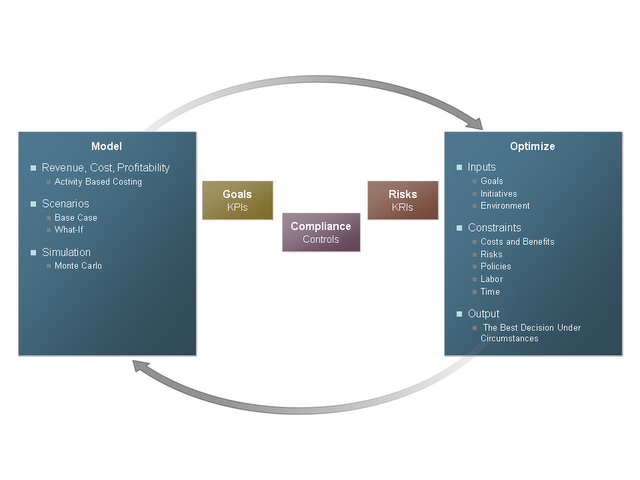 By Nenshad Bardoliwalla on February 1, 2010

This is the fourth in a four part series on the Unified Performance, Risk, and Compliance Model.  Part I covered the strategize and prioritize phase, Part II covered the plan and execute phase , and Part III covered the monitor and analyze phase.  In the model and optimize phase of the Performance Management Lifecycle, we […] 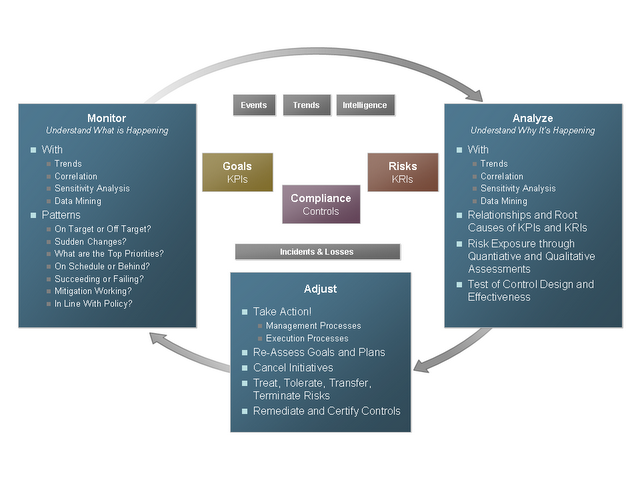 In the first installment of this series, we laid out the performance management lifecycle and its four phases.  We also explored in detail the first phase of the PM lifecycle, strategize and prioritize, where we develop and set the strategy, plan risks and set KRIs, plan compliance and set controls, and put together strategic action plans and […] 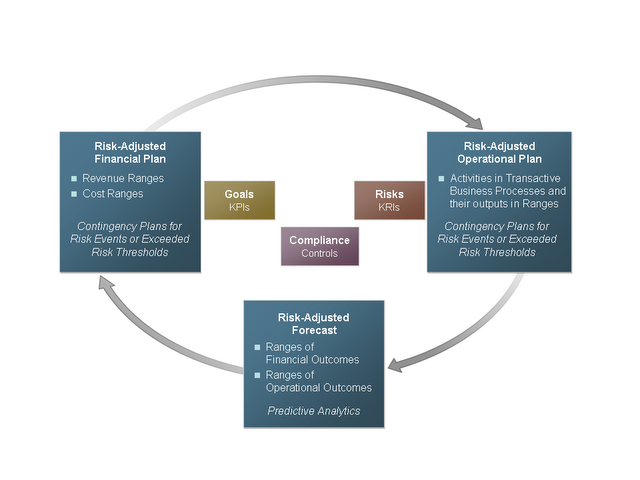 In the previous installment of this series, we laid out the performance management lifecycle and its four phases.  We also explored in detail the first phase of the PM lifecycle, strategize and prioritize, where we develop and set the strategy, plan risks and set KRIs, plan compliance and set controls, and put together strategic action plans and […]

The Unified Performance, Risk, and Compliance Process Model – Part I – Strategize and Prioritize

By Nenshad Bardoliwalla on January 5, 2010

The classic performance management lifecycle that most theorists and practitioners use to describe the continuous cycle of performance improvement consists of four phases: strategize & prioritize, plan & execute, monitor & analyze, and model & optimize. This lifecycle represents the natural stages that most companies go through over and over again as they improve their […] 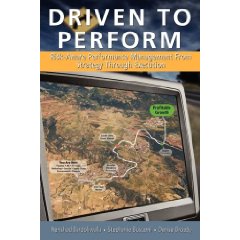 Perspectives from DreamForce ’09: On the current state of SaaS in the Large Enterprise with a focus on current SaaS BI trends

By Nenshad Bardoliwalla on November 24, 2009

I had the pleasure of conducting an interview at the DreamForce ’09 event with Dennis Howlett, who writes the well-written and widely-read Irregular Enterprise blog on ZDNet.  The video of the interview is embedded immediately below and a transcript of our discussion follows.

NDB: Hi. I’m Nenshad Bardoliwalla and I’m the author of Driven to Perform and formerly an executive with SAP.
DAH: Ok.  So, Nenshad, what I’m interested in is how you see the difference between the cloud operators that are presenting at events like SalesForce (DreamForce ’09) compared to the more traditional events that we see around the place.  So what are the real differences you are seeing?
NDB: One of the key things we saw in yesterday’s keynote as well as today’s is the pace of innovation.  What you are seeing with Salesforce.com with their Sales Cloud, Service Cloud, Custom Cloud, and then with introduction of Chatter, is that they are able to introduce large pieces of functionality to their customer base in very quick deployment cycles that is just almost impossible for the on premise vendors to do.  So, in 6 month to 1 year intervals, to release major pieces of functionality that they can deploy to their entire installed base, versus the 12-18 month cycles of the on premise vendors that require an upgrade, is a very signficant differentiator.
DAH:  So what does that mean in real terms for people who are buying technology today and going in to the future?
NDB:  I think that if I look at the amount of money that customer are spending on the existing on-premise applications that they have versus the amount of money they spend on the cloud (based offerings), they are able to realize value much quicker than they could with the on-premise technologies they have.  Because the cloud vendors are able to distribute the cost of the platform across a very, very large economic base, you are able to get the economies of scale based efficiencies passed to the customer.  So you wind up paying a lot less up front, on a very consistent, metered basis with the cloud offerings, and you are also able to absorb the innovation much quicker and deploy it to your business.
DAH:  It’s very obvious to me that start-ups and young companies are going to be immediate targets for this kind of thing, but what about companies that have been around 20, 30, 50, 100 years?  Do you see those (companies) making a move into this area any time soon, and if so, what sort of areas would you suggest?
NDB:  I think what we’re seeing in the large enterprise space is that there has certainly already been considerable penetration of human capital management solutions, as well as in the CRM area.  I’ve heard fairly consistently at SalesForce.com (at the DreamForce ’09 event) of 5000, 10000, even 12000 user deployments, etc..  I think even flagship, marquis customers of the on-premise vendors like Siemens adopting 420,000 seats of a SaaS vendor suggest that the large enterprise is definitely willing to absorb the innovations of the cloud computing model.  That being said, I think you find areas like financials, an area that you (DAH) and I both share a keen interest and expertise in, kind of coming up along besides the human capital management and sales force areas, and now starting to take hold with vendors like Workday, but also others like Intacct, you wrote about FinancialForce earlier, etc.
DAH:  Your interest obviously tends to be in the BI area.  What sort of impact do you see these kinds of technologies having in that area and what benefits will customers see as we move forward?
NDB:  In the business intelligence area you have seen an explosion, especially in the last year, in terms of investment in companies who are providing SaaS BI capabilities; companies like Birst, PivotLink, Good Data, Indicee, which suggests that there is a very, very healthy market for people who are trying to get business intelligence capabilities but have never been able to afford to do so in the small and medium sized businesses, but then in the larger enterprise, without being able to change their deployments.  I know in my experience in 10 years in the large enterprise, though not in SaaS, customers not being able to change the system quickly enough, which for (reporting and) analysis is a very key differentiator.  Having the ability to do that with the SaaS vendors is a key step up I think for business intelligence technologies.
DAH:  It’s a very fast moving area.  What do you see in the immediate future, say in the next 1 to 3 years (for the BI space)?
NDB:  I think right now we are seeing a very strong focus on tools, and as you know, Dennis, in most markets, things that start off as tools eventually become packaged and move upstream and become applications.  I think we will see in the next 1 to 3 years a couple of key marquis applications players in the BI space, people who are doing Corporate Performance Management, people who are doing Sales Performance Management, or even Supply Chain Performance Management.  We’ll have real established application vendors for BI applications that can run alongside the SalesForce.com’s, run alongside the Workday’s, and other marquis Tier 1 SaaS platforms.
DAH:  And they would, in that sense, need to be pretty affordable, I would guess, as compared to what we see at the moment with the traditional vendors, yes?
NDB:  Absolutely.  I think affordability is one of the key areas where there will be differentiation, but also another is “legs and regs” (legislation and regulations, especially important in Financials).  I think we are seeing now a fairly high degree of volatility in terms of the move to IFRS, people publishing via XBRL, other types of standards where people can absorb that and let their vendor take care of that for them instead of them reconfiguring their chart of accounts, them trying to map to XBRL taxonomies, etc.
DAH:  Great.  Thanks very much, indeed.
NDB:  Thank you.