This morning, our opening keynote was from SAP’s other co-CEO, Jim Snabe. He started with a bit about competitive advantage and adaptation to changing conditions, illustrated with the fact that Sumatran tigers have evolved webbed feet so that they can chase their prey into water: evolution and even extinction in business is not much different […] 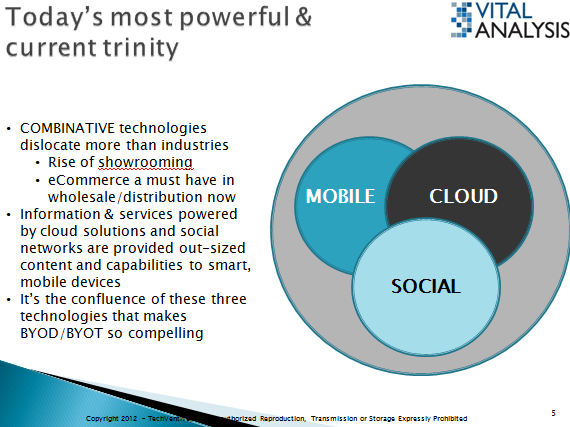 Where Social, BPM and Event Technologies Must Go

A trinity, that curious but powerful happening when three or more technologies converge, presents transformative opportunities for technology users. The one that’s been a staple of computing lately involves social, mobile and cloud technologies. Just look at how these three technologies, together, have changed how people communicate, share and provide feedback. Image courtesy of TechVentive, […]

Maintaining Ethical Standards As An Industry Analyst And Enterprise Consultant

Every once in a while, someone suggests that vendors pay me for coverage. The latest accusation actually used the term “pay-for-play”, which is a derogatory term for industry analysts who require that vendors be their paid clients before they receive any coverage by the analyst, and is often considered to be unethical. Vendors who work […]

bpmNEXT Wrapup: The Good, The Bad And The Best In Show

The first bpmNEXT conference has finished, and it was a great experience for me. I’m still on the west coast, enjoying a half-day in San Francisco before flying home, and having a bit of time to reflect on what I liked — and the few things I didn’t like — about this week’s event. First […]

There’s a select group of about 80 BPM industry experts gathered together this week at the Asilomar conference center in Pacific Grove, CA, attending a new conference organized by Bruce Silver and Nathaniel Palmer: bpmNEXT, billed as “defining the next generation of process innovation”. The first afternoon was mostly just for getting here and […]

At the end of 2012, I had a few hints that things at Alfresco’s Activiti BPM group was undergoing some amount of transition: Tom Baeyens, the original architect and developer of Activiti (now CEO of the Effektif cloud BPM startup announced last week), was no longer leading the Activiti project and had decided to leave […]

Effektif BPM In The Cloud

No, that’s not a typo in the title: Effektif is the newest cloud BPM offering, and it has some pretty impressive BPM credentials: the newly formed company is led by Tom Baeyens, who created not one, but two open source BPM projects: jBPM (now part of Red Hat/JBoss) and Activiti (now part of Alfresco). It’s […]