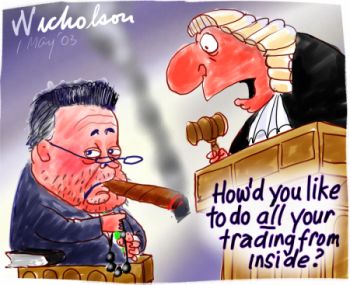 A colleague sent me a link to an article last week about an insider trading scandal involving both a CPO and his/her spouse. The CPO will go unnamed in this context because it’s not relevant to the general issue at hand. Still, the issue of ethics and integrity in procurement, finances, outsourcing and shared services […]

China: Red Chips and a New Type of Supply Risk

Corporate scandals and arrests in the West often skirt the business headlines, making news one hour and quickly getting buried the next. The case is a bit different in China, however, which appears constantly ready to point a figurative finger at the…

A former Deloitte Vice Chairman is handed an unfavorable court decision in Delaware. The allegations against him are eye opening. How can service firms prevent these events from happening in the first place?

Anil Kumar Pleads Guilty — But What’s the Lesson for Procurement?

Over on The Financial Times blog, John
Gapper provides some details and analysis of Anil Kumar’s guilty plea
in the Galleon insider-trading scandal. For those who have not been
following the situation closely, Anil Kumar, a former McKinsey D…

Late this afternoon, a Reuters story hit the wire confirming that Anil Kumar, a former McKinsey Director, was no longer with the firm following an internal investigation. Reuters quotes an email note from McKinsey spokesman Michael Stewart noting tha…