Image via Wikipedia One of the more interesting developments of the last week has been the announced acquisition of ATG (Art Technology Group) by Oracle Corporation.  ATG is one of the leading suppliers of ecommerce solutions and Oracle liked their stuff well enough to plunk down a cool billion bucks for the logo. I thought […] 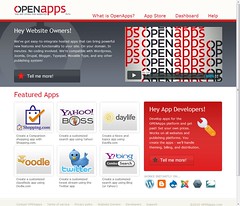 OpenApps at DemoCamp 26: Easy Functional Extensions of Your Website

Last night was DemoCamp 26: a forum for people to show off whatever they have to demo. It’s a good way to network with the tech community in Toronto, and see emerging new applications often before they even launch. We started with a keynote from April Dunford on lean marketing, a topic that many of […]