Oracle has some seriously significant things to say to its customers about the cloud, enterprise software, engineered systems, and the rest of the company’s strategic portfolio. And if it approached the task a little more seriously, I think the company would start winning not just in the eyes and wallets of its customers, but also […]

Over here we are anticipating this year’s Cloud Computing World Forumin London, but over in the US Larry Ellison, Oracle’s founder and CEO since 1977, has pivoted his position on the Cloud along with “crossing a line” to trash key competitors.  Elsewhere old guard software giants like IBM are mis-communicating the Cloud messages.  How does […] 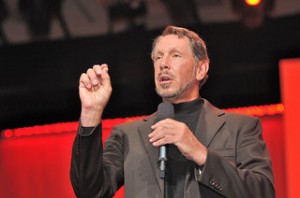 I first met Larry Ellison, briefly, in 1997. I have watched him infuriate competitors, drive analysts to drink, generate more quips than all boring tech execs put together. Over those 15 years I have also learned to look beyond his “dull roar” …

You can’t fault Oracle for consistency in its cloud messaging, going back five years and more. But does CEO Larry Ellison still have his heart in it?

Oracle and the Vision Thing

“Almost seven years of relentless engineering and innovation plus key strategic acquisitions. An investment of billions. We are now announcing the most comprehensive Cloud on the planet Earth,” said Oracle CEO, Larry Ellison. “Most cloud vendors only have niche assets. They don’t have platforms to extend. Oracle is the only vendor that offers a complete […]