Dark Data is a Big Opportunity for Services Companies

Why is Big Data big? Obviously not because someone invented a new statistical method of data analysis that can explain everything. It’s because there is a lot more data spewing out of business processes where there were none before. The questions haven’t changed – as a business manager I still want to know how to […]

The Trouble With Powerpoint

A couple of weeks ago, I was walking someone through a Powerpoint deck on the phone. The discussion was going well. But every now and then she would skip ahead. I’d be on slide 12 expounding some gory detail of our actions in Q1 and she would say “I have a comment to make about […]

From zero to over $50 billion in 20 years. That’s been the meteoric rise of the Indian IT-BPO industry. For an industry of such significance, to India and the world, it is not very well understood outside the industry. Perhaps because it doesn’t manufacture a physical product. Or perhaps because it is such a new […] 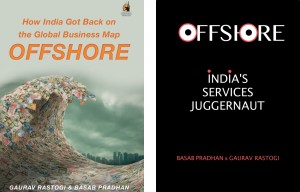 Offshore: The Book is Out

My book on the offshore services industry, co-authored with Gaurav Rastogi, is now out in both print and Kindle versions. In India a print version of the book, published by Penguin, is available in major bookstores and online at Flipkart. In India the book is called Offshore: How India got back on the Global Business […]

In August Congress passed a bill to fund enhanced border security which is now Public Law 111-230. The funding for this bill was achieved by increasing the visa fees for H-1B and L-1 visas by $2,000. The fees apply selectively to companies who employ more than 50 employees in the US and if 50% or […]