This week Zach Nelson, CEO of NetSuite, a.k.a. Larry’s other company, took over the Marc Benioff chair as guest antagonist but given the relationship between the companies the vibe was more sedate.  For instance, no one went to the talk at the Lam Theater in Yerba Buena Gardens wondering if Nelson would be controversial or […]

I was finally enlightened as to why I find Oracle’s annual customer event, Oracle Open World, to be an increasingly frustrating and largely unfulfilling experience. For the last few years I have been laboring under the misperception that one of the goals of this event was to inform the influencers about key Oracle technology and […]

By Vinnie Mirchandani on October 4, 2012

I have waited for over a decade to see an enterprise vendor – IBM, HP, SunGard, EMC etc – detail how they would deliver to their promises of on-demand, utility, cloud computing. But they continue to persist with data centers designed during the Cold War in locations which often violate more recent tax, latency and […] 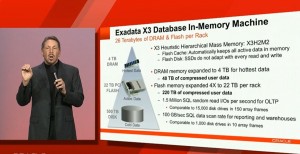 I’ve been at OpenWorld for two days as I file this but so far, I have little CRM oriented material.  CRM really kicks in on Wednesday when the company focuses on CX or customer experience the moniker that Oracle has given to much of its CRM focus. CX is good for what Oracle is about […]

I honestly thought I was going to have to wait longer to hear anyone from Oracle talk about seriously focusing the company’s hardware and software lines on the Cloud.  True, they’ve been saying cloud-like things for a couple of years but the pronouncements were features and functions that added something to the cloud discussion without […]

All right!  Recess is over!  If you went to Dreamforce last week you can be forgiven for taking a kind of victory lap in your head today because it was a truly great experience, besides if you are like me you are still tired.  One reason I think so many people like Dreamforce is its […]