New Data on Social Business: Communities Are the #1 Initiative in 2013

At IDC we do a social business survey a couple of times a year and I now have fresh and just out of the field data to share. It’s proven very interesting and telling to trend the survey results over…

One of the things that causes a lot of anxiety in SaaS is market size.  If you’re creating the latest Pinning app, or Social Network, the odds are surely against you.  But in consumer internet, often you know if you hit it, however low the odds are, at least the market is huge (or at […] 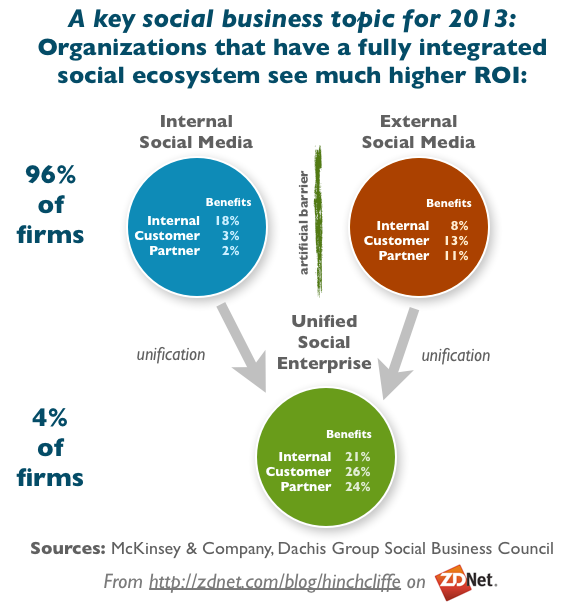 What will 2013 hold when it comes to the way businesses employ social media to how they operate? Or perhaps more accurately, to the way they find themselves increasingly surrounded by all things social? As organizations prepare their strategic plans for 2013, it sometimes feels that we’ve been on this treadmill for a good while […]

The Kill Email meme never really dies. Ever since the dawn of enterprise social computing circa 2006, the value proposition has been waffling between being a process killer to a portal killer and my favorite, an email killer. Stare Email in the face all you want. She’s looking back and laughing at you. Then I […]

How social data is changing the way we do business

It’s a familiar litany now, that the openness and transparency of social media will unleash a wide range of compelling outcomes for our organizations, if we’ll only embrace it. While there is little doubt that social media is one of the great phenomenons of our age, there are certainly those that think the hype surrounding […]

Eight Ways to Prepare for Social Engagement At Scale

Over the last year of so, social business has matured to the point that the vast majority of organizations have some operational social media capability, ranging from the largely tactical to the highly strategic. While we recently highlighted some of the very best strategic stories in the dozens of high-impact case studies in Social Business […]

Social Media is reaching mainstream adoption in the enterprise – right? Do we really know that? Or are we just speculating? Until now, we were just speculating – we assumed, presumed, and deducted from most research or projects we have seen thrown around in the press, quoted ad-nausea in presentations, and generally not knowing for sure. […]

Last week, Constellation Research founder Ray Wang was quoted making an important — and rather provocative — statement about the default stance of external social business. It’s one that goes to the very heart of how we should best organize our businesses to engage with the social world. Specifically he said: It’s … dumb to […]

This week I’m in Sydney to speak at several social business events and begin what will turn into a global book tour forSocial Business By Design, the new enterprise social media management book I recently co-authored with Peter Kim. Australia is a unique market for social business and I’ve learned a lot in preparing for […]